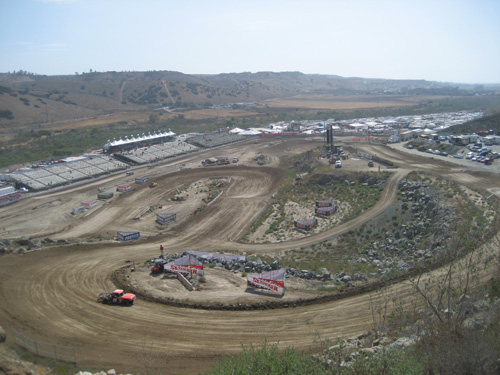 In 2005 Jim Baldwin, a Southern California developer and off-road racer, saw the potential in CORR and bought the series from Marty Reid. About the purchase Baldwin said, "I am extremely proud to be a part of bringing Championship Off-Road Racing CORR back to Southern California. I thought to myself, how can we open this up to more people? We have to take the series to mainstream America and go large, so everyone can share in it's success. That's really my goal to take the CORR series mainstream so everyone can make a decent living at what they love to do, race."

Baldwin quickly put into action a multi-year expansion plan to bring the action packed short course racing events before the mainstream motorsport public. Baldwin made few changes the first year with the exception of adding two events that were held on the west coast. Baldwin was able to build a temporary racecourse on land he would later build a housing track on. The track was 1.7 miles long, counting it's land rush start, then after the start was a 0.97 mile loop, located in Chula Vista, CA near San Diego. An optomistic Baldwin installed seating for 30,000 fans. Taking a page from Mickey Thompson’s introduction of the Riverside event he put to motion a huge advertising and PR budget. Baldwin then secured a large gathering of “cross over” racers including NASCAR’s Boris Said, Supercross stars Jeremy McGrath and Travis Pastrana, Indy Car legend Roberto Guerrero and Monster Garage television star Jesse James to the event. The first event Pro 2 class winner was Dan Vandenheuvel winning both Saturday and Sunday events. Johnny Greaves won the Pro 4 class by dominating both day's events. Jason Baldwin won the Unlimited Desert Class. Jeremy McGrath made is off-road racing debut and turned in a respectable 5th and 4th in his first two days of Pro 2 racing. McGrath now has a video off-road game that can be found at http://raceroffroad.com/content/.

In 2006, CORR continued to host races in Crandon, WI and Bark River, MI, and officially added the Chula Vista International Off-road Raceway to the schedule for a total of four race weekends throughout the season. To record and televise the series Baldwin acquired the talents of Perpetual Motion films. In 2007 Baldwin’s CORR series came back to Chula Vista but this time to an all new and permanent race facility called The Quarry. The appropriate name came from Baldwin owning and operating a rock quarry where he built the permanent track. In fact the first live short course race to be aired by a major network was of a CORR event held at The Quarry in 2008. Baldwin said the live event came about as the NBC ratings for CORR's previous delayed event telecast's had doubled from 0.5 to 1.0 between CORR's first and third aired events. Continuing CORR’s expansion other venues were added at the LA County Fairgrounds, Antelope Valley Fairgrounds and expanded beyond California’s borders to Nevada and Dallas/Fort Worth. The LA County Fairgrounds was a major under taking, besides installing fencing and grandstands, Baldwin had his crew dig out a race course in the parking lot and repave the area after each event.