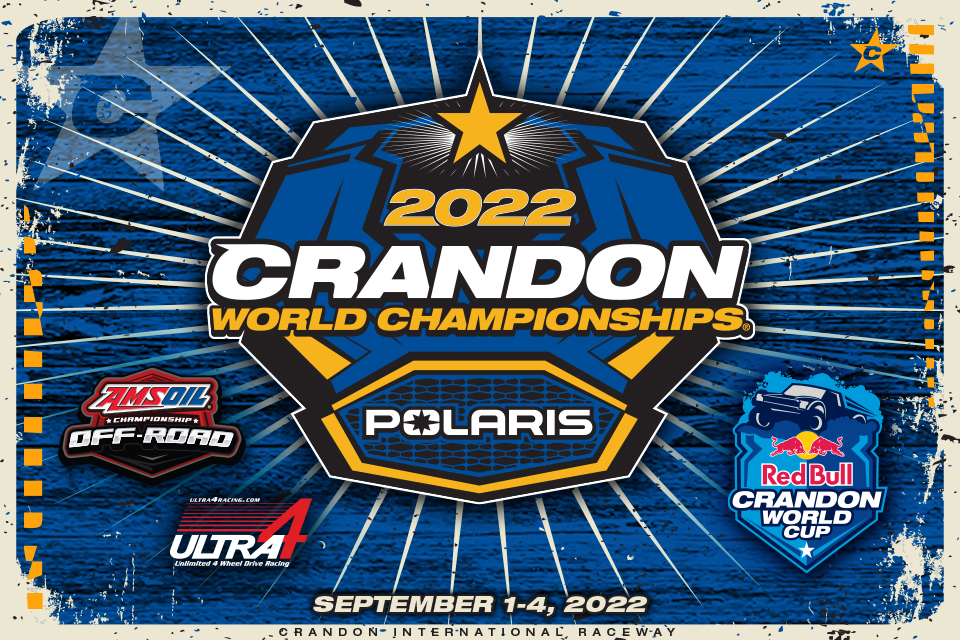 CRANDON, Wisconsin (August 23, 2022) — Reflecting a highly cooperative effort by a diverse group of race series, corporate partners and off-road competitors from America, Mexico and Canada, Crandon International Raceway today released the most action-packed schedule in the 53-year history of the Polaris Crandon World Championship Off-Road Races. Offering four days of on-track action, an anticipated 400 race teams, and two nights of racing under the lights, spectators can look forward to 71 total on-track appearances by the AMSOIL Champ Off-Road, Ultra 4 Series and Class 11 racers including 27 rounds of practice and qualifying.

Scheduled for September 1-4, the record-breaking Polaris Crandon World Championships schedule offers a highly diverse variety of trucks, open-wheel buggies, UTVs and even stock Volkswagen sedans competing in a total of 44 races beginning on Friday, September 2nd. The busiest day of the weekend will be Saturday, September 3rd with 20 races on tap, including the Ultra4 Rage on the Rocks races held under the lights that evening.

The amount of world-class competition including the unlimited machinery in the Pro category truck, buggy and UTV classes – not to mention free concerts and fireworks — adds up to the best value in America motorsports considering the cost of a Labor Day weekend World Championship wristband is just $70.00, with single day admissions available for $40.00. Five nights of grass camping in the sold-out 2,100-site Camp Crandon starts at just $125.00.

The secret to success in drawing a weekend crowd anticipated to reach 65,000 is not just quantity, but also attracted the highest quality the sport has to offer. Crandon is the largest, oldest and most prestigious short-course off-road race in the world, and gathers the best drivers in Pro and Sportsman Champ Off-Road series racers going all-out to win both season championships and Crandon World Champion title and rings for all classes.

For the second time in Crandon history all rock racing classes made famous at the annual King of the Hammers event in California will be competing for the Crandon Ultra4 World Championship. Every Ultra4 category will compete twice over the three day World Championship schedule, including the blockbuster of night racing Saturday evening known as Crandon’s “Rage on the Rocks.” Fans will enjoy all the festivities from a recently upgraded and expanded “Rigid Ridge,” an expanded area featuring a bar, stage, live music, a big screen to watch Crandon’s professional livestream and a post-race fireworks show.

Joining the Champ Off-Road series will be a return of race-prepared vintage Volkswagen Beetles making up Continental Tire Crandon Class 11 World Championship presented by Gravel Kings. The popular sedans have been a staple of desert and Baja racing from the sport’s earliest days. Race organizers expect almost 20 of the Bugs to arrive from around the United States and Mexico to compete in two rounds of competition on Friday night and on Sunday.

Finally, the “Super Bowl of Short-Course” will spotlight the sport’s fastest machines and Pro category drivers in the 7th annual Red Bull Crandon World Cup. Off-road racing’s biggest names will end their season in a day of non-points, big money races to take home coveted Crandon World Championship titles and the biggest prize of all — the annual Red Bull Cup finale for Pro 2 versus Pro 4 contestants.

For fans and racers, the golden gates of Crandon International Raceway will open at 12:00 noon on Wednesday, September 1st. Fans are welcome to enjoy all four days of on-track activity including Thursday’s Pro and Sportsman practice and qualifying sessions. A group of 100 UTVs will also take part in Thursday’s Lucas Oil Legends Poker Run presented by Polaris to raise money for the Off-Road Motorsports Hall of Fame (ORMHOF) and the Forest County ATV Association.

In addition to racing, on Friday morning fans and racers love attending the annual Lucas Oil Labor Day Parade presented by Polaris in downtown Crandon, as well as live music on Friday and Saturday night in the newly renamed Crandon Clubhouse immediately following the conclusion of on-track activity.

“We are not only surviving as a racing facility after more than fifty years, but our events are thriving, ” shared Crandon President Cliff Flannery. “Part of that success is bringing together the world’s best off-road racers and giving fans the experience to watch the best of the best at one huge weekend. There is a reason that drivers want to come here to earn Crandon World Champion rings. Where else can in this country can you see so many Pro and Sportsman racers all at the same place competing day and night?”

“Our goal is simple, and always remains the same. We want to create the very best off-road race on earth for our enthusiastic fans, race teams and our growing list of corporate partners,” added Crandon Promoter Marty Fiolka. “Only the complete cooperation of the AMSOIL Champ Off-Road series, the Ultra4 series, and a big group of Class 11 teams makes it possible to watch 44 amazing races over three fun-filled days. When you factor in the invaluable group of hard working volunteers, it’s amazing what can be accomplished when all sides are working together to build a special motorsports tradition like Crandon.”

Weekend tickets and more information can be found by visiting www.crandonoffroad.com.