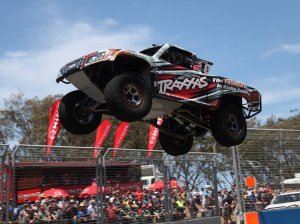 SST World Championship points leader Sheldon Creed of El Cajon, Calif.; would navigate his TRAXXAS truck past a mid-race road block on Lap 4 to cruise to his eleventh SPEED Energy Stadium SUPER Trucks Presented by TRAXXAS victory of 2016 in race one of the Gold Coast 600 weekend.

With most drivers struggling to hit their marks on the ultra fast and technical temporary beach side street circuit that makes up the 15-turn 1.85-mile (2.98 km) course built for the SuperCars, Creed would quickly advance to the front of the field from his last starting position by lap three after benefiting from a spin by Canyon Lake, Calif.; driver Sara Price that log jammed the entire field. Creed was able to slide by on the outside and pass everyone to quickly move in the second position.

Lap-5 would see the TRAXXAS driver set his sights on leader Greg Gartner of Penola, South Australia, Aus.; the driver of the R&J Battery/Fuchs/Delkor Calcium Battery truck would be able to hold off the hard charging Creed for two laps before Creed would slip by on the inside of a corner and roll on cruise control into the sunset.

Well behind Creed a good battle for the second position was brewing as Scottsdale, Arizona driver P.J. Jones in the Royal Purple Synthetic Oil truck would work his way past Gartner into second, as Gold Coast, Queesland, Aus.; driver Matt Brabham would latch onto Jones bumper and move into the third spot ahead of Gartner. However the two drivers would run out of laps, as the lead Creed had built was just too great.

Jones would go on to finish in the second position while Brabham would claim the third spot to stay alive in the points championship. Gartner would hold on to finish in a season best fourth position.

Shaun Richardson driving the Positive Quality Trailers/ Thor Demolition/ Savino Del Bene truck would rebound for two spins during the course of the 10-lap event to recover and finish in the seventh position.

Early race leader Bill Hynes of Nazareth, Penn.; would drive a very conservative and smart race holding off a hard charging Gartner and Jones at the beginning of the event to finish his World Gym Australia truck in the eighth spot.

Making her first SST start in Australia Sara Price driving the SuperCheap Auto/Coffee Sisters/Murphy Glass & Mirror truck would really struggle getting the handle on the tight and technical track pointing her truck in the wrong direction multiple times. Price would be credited with ninth position.

First time SST competitors Matty Nolan of Pacific Pines, Queensland, Aus.; and Craig Dontas of Adelaide, South Australia, Aus.; would both have their hands full in their first SST start encountering all kinds of chaos spinning and bouncing off all sorts of barriers, walls, and competitors. The two drivers doing double duty this weekend racing both their v8Ute and SST would be credited with the tenth and eleventh positions in there Haymans Electrical Wholesaler and Clipsal 500 Adelaide trucks.

Norwell, Queensland, Aus.; driver Paul Morris in his SuperCheap Auto/Hungry Jacks would pull into the pit lane on Lap-4 with a mechanical issue and would loose nearly a lap to the front runners. Morris would be recorded in the twelfth position.