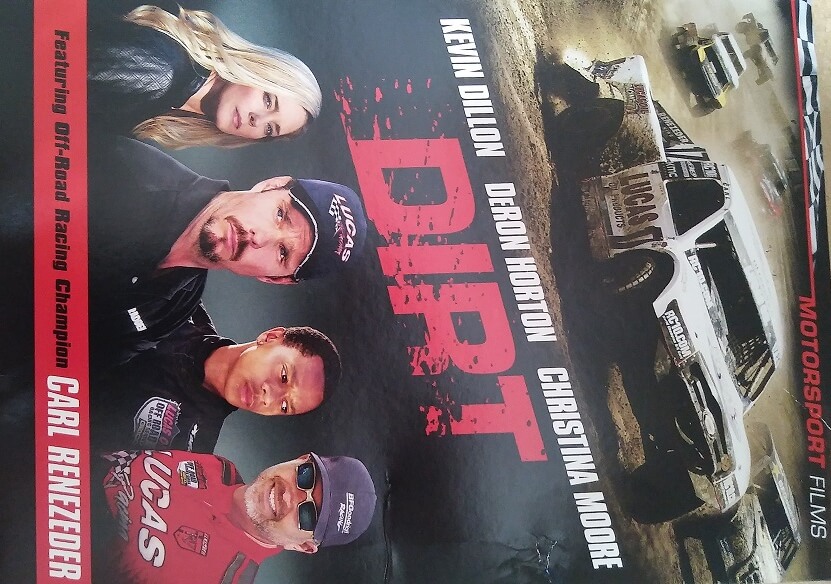 The movie Dirt is about Dez Truss a 17-yearl-old who turns to heisting high end cars as the sole support for his younger sister. Being as they say “young and dumb” while chased by police Dez backs up to wave at a policeman that rolled his cruiser. Little did Dez know the dash cam captured his face. Enters police Captain Joe Freeman who recognizes Dez as one of his earlier stand out Kart racing students.

As it turns out Captain Joe is good friends with short course racing team owner Rick Radden. So instead of locking young Dez up for his crimes of car boosting Captain Joe turns Dez over to Radden. Radden and his wife agree to take Dez in and supervise in exchange for manual labor for the team.

Before Dez lost his parents his father owned a shop giving him a background in mechanics. It didn’t take long before Dez was offering suspension set ups that changed the results of the down on their luck race team. Current truck pilot, Trent Lerion, played by Domninic DeVore, was the hot headed, arrogant, driver that despised the youngster. Before long Lerion showed up from partying all night and Radden fired him. Pressed for a new driver Radden puts Dez in the cockpit (every race fans dream). With his driving abilities and set up changes Dez quickly turns the team around.

But let’s not forget his shaded past. Having had his garage raided by police where Dez sold his hot cars, the bad guy, Harvey Pearson, played by Matthew Glave, blamed Dez. In retaliation Pearson sends his mob to the team shop where he destroys it and not knowing Glenda Radden was hiding in the shop set fire to it, sending her to the hospital.

Dez is upset his past had caused the team harm and works with Captian Joe to get back at Pearson.

With the bad guys behind bars it was back to racing. Dez quickly settles into his job as short course racer. In fact it doesn’t take him long to take on King Carl Renezeder. Dez was not in the running for a championship but the team pulls out all stops for the Shoot Out held at the end of the season. During the Shoot Out Dez is able to over come the many obstacles encountered. In fact he even manages to take the checkers earning his team sponsorship for the next year. In fact sponsorship coming from someone that looks an awfully like Forest Lucas.

The film shows clips from many of Lucas Oil Off-Road Racing Series LOORRS tracks that race fans will identify with. There is plenty of racing action throughout the movie as well. All the press releases noted Carl Renezeder and even have his likeness on the DVD cover. I expected he would play more of a role in the movie. In fact, since he just retired from racing I thought maybe this was his move debut for him to be the next James Dean of racing movies. But, turns out he was mentioned often and shown racing but didn’t have a major speaking part that I assumed he would.

The film, written by John Ducey and Alex Ranarivelo and directed by Ranarivelo is put together as well as any production out there. Movie enthusiasts, and race fans alike, will root for the under dog and enjoy plenty of racecar action making Dirt a good investment that provides some exciting entertainment.