The Great American Shortcourse GAS series, Powered by Optima Batteries, held Rounds Three and Four at Glen Helen Raceway May 22-23. On Saturday a cool breeze provided fresh air to the race engines and the drivers used the horsepower to entertain the fans. Sunday’s event was under clear skies and the action was just as fast a furious as the day before. 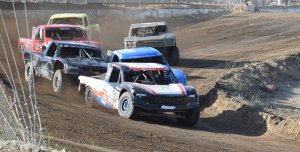 RJ Anderson would keep the pack behind him in both Pro 2 events.

The Pro 2 class closed the Saturday evening show with plenty of action throughout the 15 lap event. Warming up the crowd early was Kipp Mickels getting his #94 on fire on the second lap and having to retire.

From there on out the race action provided all the needed heat. Mickey Thomas had set quick time earlier in the day and when racing got underway he found himself in third behind Mason McCarthy and RJ Anderson. Thomas had close company with Dave Mason Jr and Dylan Cochran, which saw the top five run nose to tail for several laps. On the fifth lap Anderson tucked inside turn six on McCarthy for the lead. McCarthy also saw Thomas slip past in the same corner. These three appeared to be hooked together as a train for several laps. Just before the white flag came out McCarthy had dropped back from the train leaving Thomas and Anderson to decide the win. Anderson would go on for the win but had Thomas riding his rear bumper all the way to the finish line.

Pro 2 again closed the two day event with RJ Anderson putting in a classroom example of winning. Once out front there was no looking back until he crossed under the finish line. There were plenty of changes occurred behind Anderson, first Mason McCarthy held second until a rear flat moved Dylan Cochran into the second position with Erik Jacobus third. A few laps later Jacobus made his move into second with Cochran now in fourth. After the restart Cochran, Adam Daffner and Jacobus all fought for position. It wasn’t until the white lap that Cochran pulled a few lengths ahead of Daffner. Under the checkers it was RJ Anderson, Dylan Cochran and Adam Daffner third. 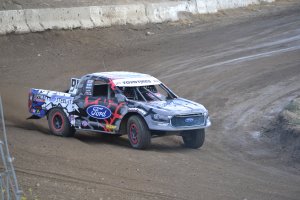 In the Pro Lite event Jimmy Weitzel III held the lead for the first seven laps with Madix Bailey a close second and fast qualifier Ronnie Anderson third. On lap eight Ronnie Anderson took the lead away from Weitzel and in doing so brought Christopher Polvoorde with him, along with Robby Hornsby, now in third. Jimmy Weitzel had dropped to seventh. For several laps Polvoorde and Anderson were inseparable but crossing under the checkers Anderson had held off Polvoorde for the win. Madix Bailey held on for third and early leader Weitzel was fourth.

When they lined up for Sunday’s race Christopher Polvoorde set a pace right from the start that the pack couldn’t match. Poolvoorde dominated every lap and left the others to battle for second. A three way battle provided a lot of action for fans as Madix Bailey, Ronnie Anderson and Jimmy Weitzel at times were three abreast. After several laps of battle it was Madix Bailey taking second after Christopher Polvoorde crossed under the checkers. Ronnie Anderson was third.

The So Cal Fleet Services Pro Buggy event had seven entries in the 12 lap event with Brady Whitlock setting fast qualifying time. When the green flag came out it was Trevor Briska leading the pack with Matthew Brister second and Trey Gibbs third. Matthew Brister wasn’t content in second and moved up to lead the race on lap four. After a couple of laps Trevor Briska was again in the lead. Towards the end of the race Brister suffered a rear flat and fell out of contention. Trey Gibbs remained consistent and held onto his second place finish behind Trevor Briska, with Lorenzo Bonacci edging Brady Whitlock out for third at the finish line.

In Round 4 the race was a four way battle between Trevor Briska, Lorenzo Bonacci, Trey Gibbs and Matthew Brister. These four were nose-to-tail for several laps with Briska leading. The race changed after the competition yellow, Trevor Briska was still leading with Bonacci second and Dale Ebberts had moved into third. At the checkers they remained in that order. 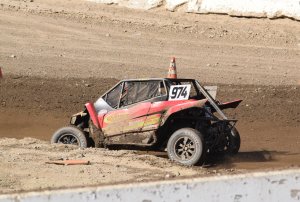 There were 19 entries in the Production 1000 race. Dallas Nord was mainly worried about Braden Chairamonte who matched his pace lap after lap.  At one point Chairamonte took over the lead but an incident on the other side of the track caused a yellow, and on the restart Nord would again take control. Once out front the race was Nord’s but he had a shadow in the form of Chairamonte at the finish line. Cody Vanderveer had moved through the pack to earn third.

Dan Kelly was the early leader in the Production Turbo UTV race. Kelly got up on the bicycle in turn five allowing Lance Root to lead the pack. Shortly after Chance Haugen took over the lead and brought Kyle Walker along with him. The race was stopped momentarily when Keith Brooks took a hard roll in turn four. It was the last lap and the race was called with Chance Haugen taking the win Kyle Walker second and Dan Kelly recovered for third.

When racing started Sunday Chance Haugen saw an opening inside of turn 5 to lead the pack and take home his second win of the weekend. Kyle Walker held second over Anthony Ochoa finishing third.

Connor Barry would again take the checkers on Sunday. This time standing second on the podium was Holden Hetritter and Talan Martin was third. 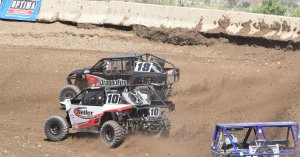 The Weller Racing SR1 UTV was a family affair with Jason #10 winning both days.