When it comes to the year 2020 one wishes they had an eraser but not for July 25 and 26 because that is the weekend that the 2020 Lucas Oil Off Road Racing Series Presented by GEICO, finally got underway. At the beginning of the year the opening rounds were set for  March 14-15 at Glen Helen Raceway but a week long rain storm meant the event had to be postponed. Then the dreaded COVID-19 came on the scene and racing was again postponed. Then a spike in the virus postponed racing again. It didn’t seem like the 2020 racing season would ever get started but the Lucas Oil Off Road Racing Series officials worked overtime to get dates for July 25-26 at Glen Helen Raceway with the stipulation of adhering to strict social distancing and face masked required. Oh ya, no fans in the stands, only racers and crew.

The LOORRS group was not going to leave their fans out totally so they offered live coverage by logging onto their Facebook page and following the link to free live stream, and was also available live for subscribers to Lucas Oil Racing TV as well. By the way, live coverage of the remaining LOORRS rounds will be available to Lucas Oil Racing TV subscribers for $6.99 per month, or $99 for a full year sub.

Changes abound for the LOORRS 2020 season. First off was a modification to the Glen Helen racetrack, with two tracks built into the one. The original track’s largest jump before turn five was cut down and moved further back towards turn 4. Between the two turns was added a dog leg with another jump before turn five. For what is called the short track, the rhythm section is cut out by adding a 180-turn at turn two, so racers cut back towards the grandstands, then a right hand takes them back to what normally was turn three.

A big surprise for the new year were no Pro 4 trucks. This meant one of the class favorites, Kyle LeDuc was a no show and others like RJ Anderson and Doug Mittag were in Pro 2 trucks only. Another fan favorite missing was Rob MacCachren after his sponsor pulled out early this year. With the Pro 4 out of the line up this elevated the Pro Lites now opening the show. 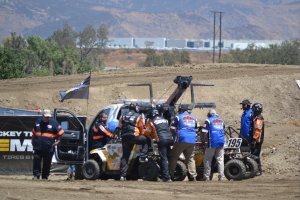 Once racing started it seems the 2020 plague was still with us as the RZR170 were out racing. A caution came out and George LLamosas had slowed and was ran into from behind by Tatum Foerster. In a normal year track crew would pull them apart and racing would continue but not for 2020. At one point there were 9 track crew trying to separate the low speed mishap. When they failed the wrecker had to come out to separate the two. Once apart, Llamosas who had been running second, drove on for the win. This weird mishap would shake off most of the bad juju for the rest of the event. Exception on Sunday the Production 1000 UTVs had their fair share of rollovers. 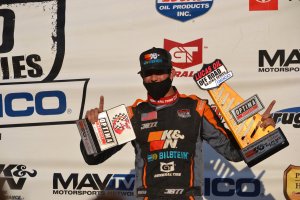 Jerett Brooks, defending Pro 2 Champion came out winning Round One

Defending Pro 2 Champion Jerett Brooks came out strong by qualifying quickest with his best lap of 49.329 compared to second fastest Ryan Beat’s time of 50.058. Ryan Beat captured the Pro Lite Championship in 2019 and has moved to Pro 2 for 2020.

Brooks held his speed in the opening round Saturday by taking a hard fought victory over Ricky Guiterrez. Guiterrez was the early leader and was able to hold second with Brian Deegan crossing over third. In Sunday’s race Brooks would again take the checkers this time with Doug Mittag crossing over second. Ryan Beat had to replace a flat midrace and was able to work his way back to third. 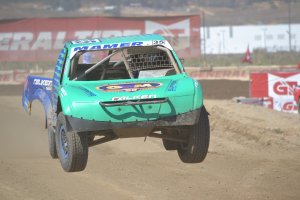 Cole Mamer was quick early, had trouble in race one but came back for race two win

The Pro Lite class had 11 entries. In both qualifying sessions it was Cole Mamer setting the fastest track times. In Round One Mamer would have some bad luck and ended the race in fifth. Christopher Polvoorde took the win with Ronnie Anderson second and Madix Bailey third. Round Two Cole Mamer was able to get back up to speed taking the win over Brock Heger. Madix Bailey was again third. 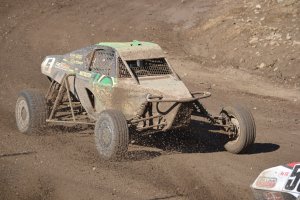 The Pro Buggy class is always competitive and proved to be in both Rounds 1 & 2. In the first race Matt Brister would take the win over Darren Hardesty with defending champ Eliott Watson taking third. In Round Two Trey Gibbs took the checkers bettering his fourth place from the day before. Eliott Watson was second and Dale Ebberts finished third. 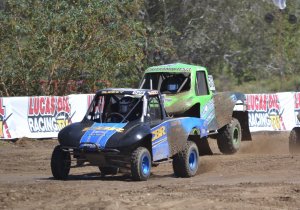 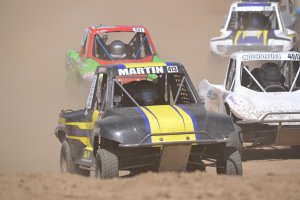 Round one of the JR 2 Kart class had 18 entries. When the checkers flew it was Brodie Martin crossing under them first. Rhyan Denney was second and Dave Culver third. The following day Rhyan Denney took the win over Logan Leggitt with Chaden Zane Minder third. 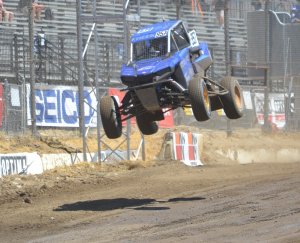 Myles Cheek had a win and second in Production 1000 UTV

Myles Cheek finished third in last years Production 1000 UTV Championship and has come out stronger for 2020. In both qualifying sessions Cheek turned quickest time and when time for Saturday’s podium it was Cheek on top with Brock Heger second and Robby Hornsby third. In Round 2 Brock Heger would take the checkers with Cheek second and Hornsby again third. 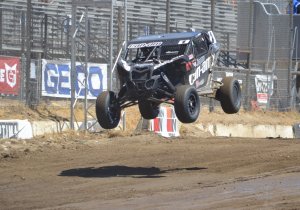 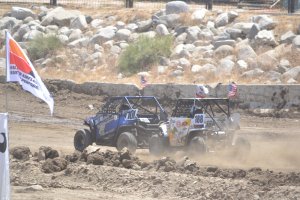 I mentioned defending RZR170 Champion George Llamosas earlier and his Round One win. TJ Siewers,who had quickest qualifying time, finished second and Ian Torfi third. In Round Two it was TJ Siewers taking the win over Ian Torfi and Ryder Van Beekum was third.