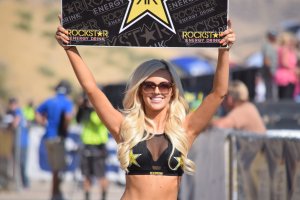 It is Kyle Leduc in charge of the Pro 4 Unlimited championship race with 447 points while Rob MacCachern has earned 438 so far, and Carl Renezeder is third with 428. Jeremy McGrath is the current Pro 2 Unlimtied points leader with 467 over Brian Deegan with 441 points, and RJ Anderson is a close third with 432 points. Jerett Brooks has a slim lead in the Pro Lite class over Brock Heger with only three ponts separating them (465-462). Brandon Arthur has 409 in third place.

Darren Hardesty has 476 points in the Pro Buggy race with Eliott Watson only five points behind in second (471). Sterling Cling is third with 457.

Brock Heger has a commanding lead in the Production 1000 UTV class with 480 points earned. Brandon Arthur has 427 in second place and third is Jason Weller at 423 points.

Trey Gibbs has the Modified Kart points lead with 380 points and Brody Eggleston is second with 355, and Cole Keatts third with 351. There is a three way close points battle in the JR2 Kart class as Ethan Ebert has 98 points and Holden Heitritter is second with 94 and Megan Mitchell is third with 92 points. The JR1 Kart class is also close on points as Brayden Fischer is leading with 96 and Jake Bollman has earned 90, and Rhyan Denney is third with 90 points also.

The series heads next to Glen Helen before the final event set October 21-22 at Wild Horse Pass Motorsports Park in Chandler, AZ.

MAVTV Select on Samsung TV Plus