Round two of the Lucas Oil Off Road Racing Series LOORRS, titled The Super Clean Duel in the Desert, presented by Rockstar Energy Drink, was held at Wild Horse Pass Motorsports Park April 19. Fans filled the grandstands and lined the fences to enjoy plenty of hard fought racing action. 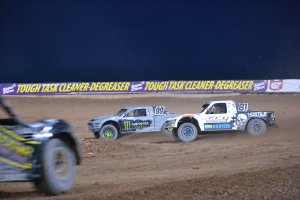 The evening show started with the Pro 4 race that had seven trucks lined up. Once Kyle LeDuc cut inside Doug Mittag the race belonged to LeDuc. At the checkers it was Kyle LeDuc taking the win over Doug Mittag. RJ Anderson filled out the podium. 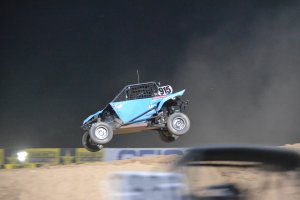 The Pro 1000 UTV event was for 12 laps with 18 cars lined up to battle. There were some challenges for the lead but when it mattered it was Robert Stout taking the win. Myles Cheek was second and Defending Champion Brock Heger third. 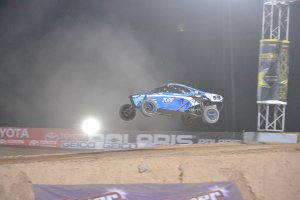 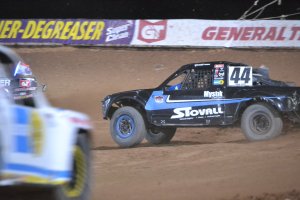 Mickey Thomas got out front and left the battle for second

The Pro Lite class always provides plenty of racing action and Round 2 was no exception. With 16 trucks on field it was no surprise that yellow flags would keep the group bunched up. Early on Mickey Thomas took the lead and left the battle for second. With the race winding down defending champion Ryan beat was able to drive into second but couldn’t catch Thomas. Ronnie Anderson managed to take third.

Pro 2 fielded 13 cars for the evening finale. Daely Pentico, running the 2m motor, took advantage of the early start to lead the field. Pentico would hold the lead most of the race but Brian Deegan came up late to spoil Pentico’s night and take the win. Those two made contact which drew a black flag for Pentico and though he crossed over second was ruled ninth. This moved Rodrigo Ampudia into the second spot and RJ Anderson finished out the podium position.