Lucas Oil Off Road Racing Series LOORRS headed south for Rounds 2 and 3 of the 2018 racing season. Once again Estero Beach Hotel/Resort hosted the event which has proved to be a fan favorite as the stands were again packed. The drivers didn’t let their fans down as they fought tooth an nail to capture the checkers. 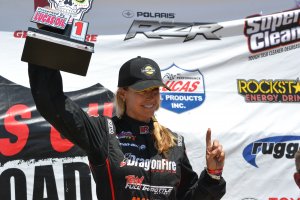 First on track were the Turbo Production UTV. In the first event on Saturday Corry Weller took her CanAm out front early and was able to finish the race out front as well. Paul O’Brien held off Van Beekum for second. The following day Paul O’Brien would take the checkers with Corry Weller second and Eliott Watson took third in a field with high attrition. 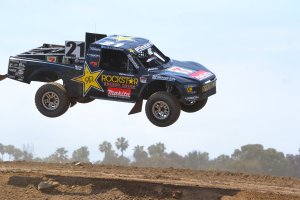 The Pro 2 Unlimited class saw a lot of action on Saturday. One incident was Brian Deegan’s truck catching fire. Deegan was able to pull off and safety crews quickly knocked the fire down but Deegan was towed back to the pits. Running out front Rob MacCachren was able to drove home under the checkers before anyone else. R J Anderson was second and third went to Jerett Brooks. Deegan was able to correct his problems and returned Sunday. He was able to give fans some exciting racing but was out of contention as he had to pit mid-race. When the race checkers came out it was R J Anderson enjoying a well deserved win. Jerett Brooks was second and last year’s number one plate holder Jeremy McGrath third. 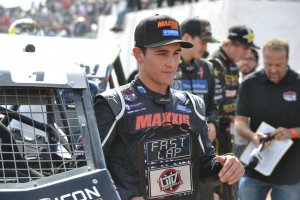 Brock Heger picked up a first and third in the Produciton UTV events.

The Production 1000 UTV class had 15 entries. Round 2 proved to be a battle between Brock Heger and Myles Cheek. the two went it at it most of the race. The two swapped the leads often but it was Brock Heger making the final pass stick. Myles Cheek was second and Ronnie Anderson crossed over third. In Sunday’s race Myles Cheek picked up his second win of the season. Jason Weller finished second and third was Brock Heger. 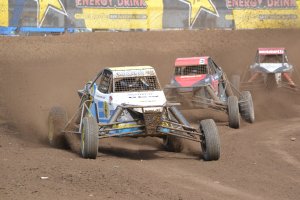 The Pro Buggy Unlimited class drew 13 starters. At the checkers it was Darren Hardesty Jr who had fought his way into the lead to take the win. Michael Bud Ward held on for second and Kevin McCullough was third. The following day it was again Darren Hardesty setting a pace the others could not match. Michael Bud Ward repeated his second finish again. In third was Trevor Briska. 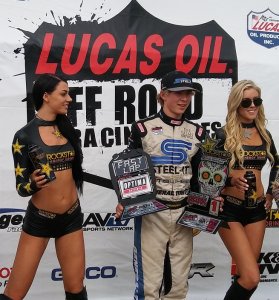 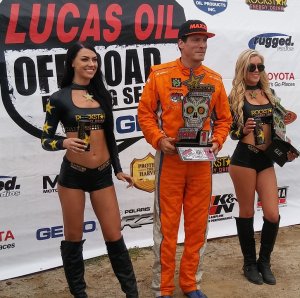 The Pro 4 Unlimited Saturday event was a real fan pleaser. The highlight came on the last lap as RJ Anderson and Kyle LeDuc put on a heated battle for the win. LeDuc had the lead and Anderson was able to take over the position in turns 2. However, LeDuc came charging hard through the rhythm section forcing his way inside of Anderson. The two slide into turn four with LeDuc actually sliding up onto anderson truck. This also collected Greg Adler. While the three were trying to get going Adrian Cenni and Scott Douglas drove past. Anderson and LeDuc fired up and quickly got back in the battle, with the two retaking the lead. But Anderson had troubles on the back stretch and LeDuc was able to get back around and would cross over the finish first. But that is when the black flag came out on LeDuc for rough driving. In the mean time Cenni had got around Anderson. With LeDuc set back Adrian Cenni took home the win. RJ Anderson was second and Scott Douglas was third. The following day was not as entertaining for the fans as Doug Mittag drove out front and had some breathing room between himself and RJ Anderson when he crossed the finish line. Rob MacCachren was third.

Be sure and click on Read the Full Story button for a complete coverage by Scott Neth.