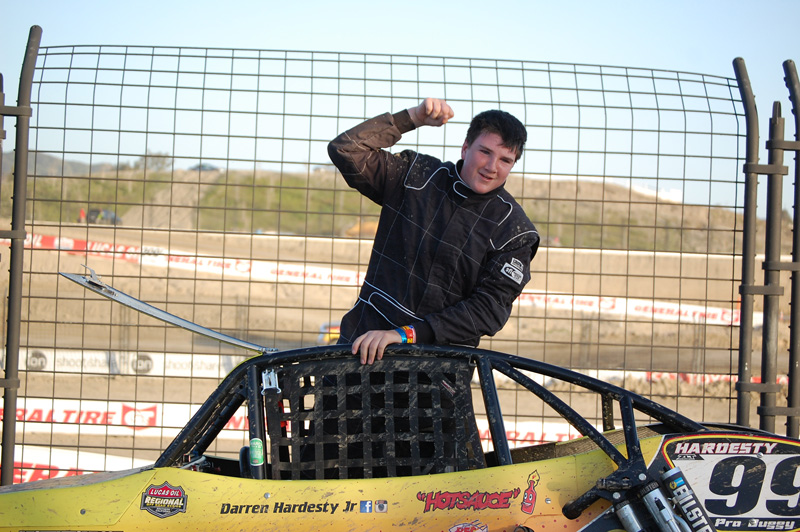 3/7-8/2015 Lake Elsinore, CA: The Kartek Lucas Oil Regional Off Road Series rounds 2 & 3 were held at the Lake Elsinore Motorsports Park with 12 races consisting of 193 racers. The Regional series has taken off so well that Lucas Oil not only has the series in Southern California but also Arizona and Utah.

Pac Racing Springs Pro Open / Pro Lite Mini Lite
There were 20 trucks making up the Pac Racing Springs sponsored Pro Open / Pro Lite Mini Lite class that Brandon Arthur set quick qualifying time in. A close second time was earned by Brad Deberti just 0.726 off the leaders time. Travis Pecoy was third quickest. During the afternoon 14 lap main event Brad Deberti put it all together to take the checkers by besting Jerrett Brooks. Third was Cole Mamer. Setting quick time in Sunday’s qualifying session was, Yamaha backed quad racer, turned truck racer Dustin Nelson. Nelson had some close competition from Ray Griffith who was only 0.116 slower for second. When the dust had cleared on the race it was once again Brad Debrerti taking the checkers. Ray Griffth was second and Dustin Nelson crossed over third.

AMA Plastics Pro Buggy
A field of 10 qualified for the AMA Plastics sponsored Pro Buggy event. Current Champion Chad George was able to set quick time over Brandon Blyth with Darren Hardesty third. Hardesty was able to do better in the main event earning the win for his effort. Bud Ward was second with a difference of 8.878 seconds from the winner. Third was Phillip Isabelle. During Sunday’s qualifying session George was a no show while Darren Hardesty set quick time over Bud Ward. After the race it was Darren Hardesty Jr standing op top of the podium with Bud Ward taking second and Steven Clabaugh third.

Weller Racing SR1
Corry Weller proved to be hard to beat in the Weller Racing sponsored SR1 class. Weller set quick time and then came out to dominate in the main event. Second place Bandon Kilgore finished second 6.087 seconds behind the leader. Bryan McCormack was third out of a class of 19 cars. Cory Weller continued to dominate on Sunday by setting quick time and taking the win. Bryan McCormick was second and Brandon Kilgore finished third.

McKenzie’s Limited Buggy / 1600 Buggy
In the McKenzie’s sponsored Limited Buggy / 1600 Buggy class of 14 starters Brock Livesey took top qualifying time over Isaac Collins by a mear 0.354 seconds. Brock Dickerson was third quickest. In the main event of 14 laps Mason Cullen was able to hold off Ron Carter for the overall win. Cullen had qualified 12th earlier in the day. Steve Lang finished third. Brock Livesay once again laid down the fastest lap during Sunday’s qualifying. Second quickest was Brock Dickerson. Chad Graham was third. When the checkers came out it was Broc Dickerson the crossed under first. Brock Livesey was second and Steve Lang was third.

Production 1000
Michael Camp bested the field of 28 contestants in the Production 1000 class qualifying session. Hot on his hills was Cody Rahders qualifying second with Trisha Wright third. In the afternoon main event Rahders took the win with David Mayhew 0.727 seconds behind for second. Early quick setter Michael Camp finished third. During Sunday’s qualifying Cody Rahders was fastest with a best lap of 55.770 besting Michael Camp’s quick lap of 56.050. Rahders was able to keep up the pace during the main event as well taking the checkers 4.618 seconds ahead of second place Tommy Scranton. Nick Templeton crossed over third.

Titan Electric Modified Kart
There were 22 in the Titan Electric sponsored Modified Kart field and at the end of the qualifying session Hailie Deegan turned in the quickest time of 37.214 with Broc Dickerson a close second with his quick lap of 37.448 recorded. In the main event Broc Dickerson had his share of troubles unlike Travis Pecoy who did everything right to cross under the checkers first. Hailie Deegan put in a good battle with Pecoy to earn second. Trevor Briska was third. Dickerson DNF. The next day Deegan put down the quickest lap with Travis Pecoy a close second. Once again Pecoy was able to turn things around in the race taking the win with a 0.617 margin over Deegan. Trevor Briska was third.

Mickey Thompson Mini Stock
Seven Mickey Thompson Mini Stock entries saw Scott Johnson take the afternoon main event and also set quick time in the morning qualifying session. Taking the second place spot on the podium was Ryan Schank with Jason Milligan crossing over third. On Sunday Johnson came back to set quick time again with a time of 58.382 over Ryan Schank’s 58.268 best timed lap. IN the afternoon race Johnson was a no show and Schank to the win over Daniel Ferdon with a times difference of 3.081 second. Third was Trim Roberts.

Mini Open / Open V8 / Desert Buggies
The mixed class of Mini Open / Open V8 / Desert Buggies had 14 entries and 13 of those saw Shane Murray turn the fastest qualifying time of 58.737 which equated to a one mile lap of 61.29 mph. Terry Closson was a very close second quickest with his time of 58.738. In the afternoon main event Erick Jacobus was able to manage the traffic to win over Brent Fouch. Terry Closson crossed under the checkers third. Chad Hill was posted as DQ. The next day Sahne Murray put in the cleanest drive of the 11 qualifiers with a time of 56.757 while second quickest, Erik Jacobus, was close with a time of 56.825. In the main event Jacobus turned in a flawless run to capture the win with Murray 6.018 seconds behind for second. Scott Wisdom took third.

GMZ Unlimited UTV/Walker Evans Racing RZR
A total of 20 GMZ Unlimited UTV/Walker Evans Racing RZR racers were on course but it was Kayla Smith that turned in the quickest qualifying time of 57.391 over Nick Templeton’s 58.013 fastest lap. Smith would also come back in the main event to take the win over Sara Price. Kyle Aarup put in a consistent drive for third. During Round three qualifying 19 Karts came out and saw Nick Templeton turn the fast time. He then came back in the afternoon main for a 2.088 margin victory over Kayla Smith. Mike Deley finished third.

Beehive Championship
Vincent Munoz was quickest of the 16 Beehive Championship contestants during Saturday’s qualifying. Ryan Dunn was second and third went to Ryan Agius. When they came out for the main event the front runners didn’t change much as Vincent Munoz won with Ryan Dunn second 6.166 seconds behind the leader. Bret Jenkins was third and Ryan Agius was fourth. On the following day only 12 of the 16 entries qualified with Vincent Munoz setting the fast lap. Munoz had mechanical woes in the main event that saw Jonathan Libby take the win over Ryan Agius. Ryan Dunn crossed over third.

J2 Kart
Mia Chapman set fast time in the J2 Kart class besting Cole Keatts by 0.532 seconds. When it came time to race Keatts turned the table around on Chapman besting with a time difference of 0.824 seconds. Connor Barry finished third. For Round three Brett Boden was the quickest qualifier. Then in the afternoon main event Boden couldn’t match Connor Barry’s effort and hard to settle for second. Barry wasn’t much faster as he won by a mear 0.367 seconds. Niko Lopez crossed over third.