SST opens 2019 at Circuit of the Americas 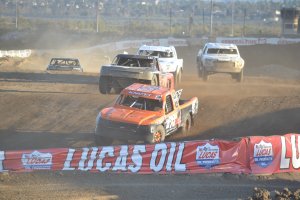 A total of 12 separate classes opened up the 2019 Lucas Oil Regional Off Road Series, presented by Kartek, at Glen Helen Raceway March 17. Rain had delayed the original opening set for February 16-17. A first was the event was held on Sunday after the Pro series was held the night before. A lot of confusion was present in this first attempt at combining the two events but the Lucas Oil personnel worked wonders and both events took place.

Dustin Nelson brought his SR1 out for the Weller Racing SR1 Pro/Pro AM event which had 13 starters. Nelson topped the podium with Paul O’Brien second and Nick Peery third.

Matthew Brister took the checkers in the Limited Buggy/1600 Buggy race. Gunner Kennedy was second and Joe Whiteley was third out of a field of eight cars.

The Mini Stock class had nine entries with Ryan Venegas taking the win over Alex Kiss. Audree Wardrip was third.

A total of 18 cars entered the AM Ortega J1 Kart race. Cole Gamma would end up taking the checkers over Talan Martin and Maverick Openshaw was third.

The Cylex Signs J2 Kart class had 26 entries and at the finish line it was Karaston Hernandez taking the win over Cade Martin. Chaden Zane Minder finished third.

A total of 18 RZR 170 rolled on the track. Travis Sallee turned best time while taking the overall win. Jaxton Lambert was second and George Llamosas was third.