One runs into a lot of nice people at the track and at Round One of the 2016 Lucas Oil So Cal Regional we made friends with Gary Zweifel out of Santa Monica, CA. During our get to know one another I found out he came from a two wheel racing back ground and now is campaigning in the Open V8 class in his #32 G Zweifel General Contracting Special.

Gary says he started in off-road with some friends in Arizona running in the old Whiplash series. Last year he raced in both the Arizona and So Cal Regional, where he earned second place for the 2015 Open V8 So Cal Championship. For 2016 he says he will focus on just the So Cal series.

When he does take to the track he is piloting a unique Chevy powered Dunn Tech chassis equipped with a Tom Masek 450 HP LS1 mounted mid-engine. Ya, you read right, the engine is behind the driver. In the cab, alongside Gary, is a TH400 transmission that runs forward into a Casale V-drive, a little different since V-drives are usually found in a marine application. The V-drive then diverts the power to the rear wheels via an off-set differential. I tried to get some photos but all is packed tightly into the chassis. So tight in fact, Gary says it takes him 20 hours to remove the engine and tranny as all the interior has to be removed before the engine and tranny can be winched up out of the truck. Not having quick repair features may not be ideal for short course but the truck can be converted to desert racing with some suspension adjustments, making it a versatile off-road vehicle.

At this event Gary was wearing many hats. He was pilot, mechanic and pit crew so when it came time for qualifying I volunteered to spot for him. During qualifying Gary avoided any trouble on track but when the times were posted he was placed fourth as his transponder signal was intermittent. This didn’t defeat Gary as he was able to place third in class during the race to make for yet another great day of racing. To sum it up Gary said, “It’s all about having fun.” 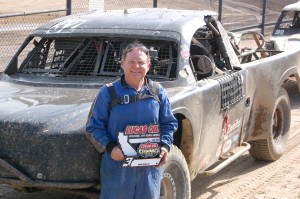