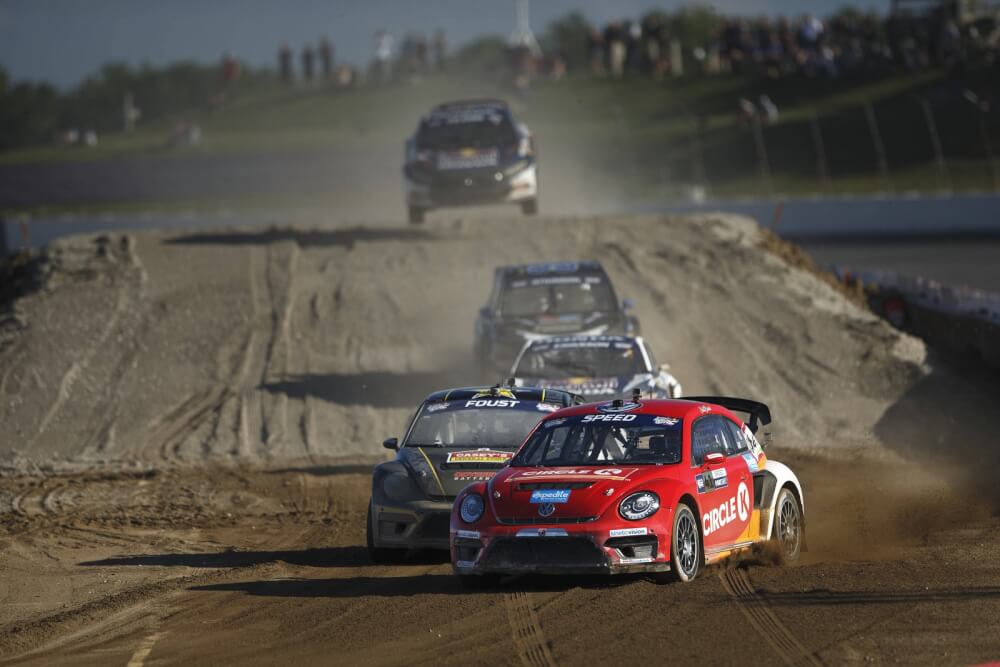 Locally based race teams were the story of the day at Red Bull Global Rallycross Indianapolis, the series’ first-ever visit to Lucas Oil Raceway. Volkswagen Andretti Rallycross’ Scott Speed and Dreyer & Reinbold Racing’s Christian Brooks took the Supercar and GRC Lites victories for their Indianapolis-based squads, with both taking their second victories of the season.

“We had a great car all weekend, from the moment we pulled it off the hauler to the last lap of the final,” Speed said. “The team did a great job and the track was unbelievably fun. This was the first time we were at a track that was predominately some sort of gravel mix, and every time we went out on the track, it was a little different. It was the most fun driving we have had yet—I’m glad that it happened here in Indy because it’s our home race and we have so many friends and family that get to come to this one.”

It was a perfect start to the weekend for Speed, who won the pole, all three of his heats, and his semifinal coming into the main. Teammate Foust, meanwhile, overcame a rocky start to the weekend to earn the second spot on the final grid by winning the other semifinal. Both managed to avoid trouble on a smoky first lap that saw multiple drivers go wheel-to-wheel and get sideways on the oval. From there, they settled in first and second, with pressure from Steve Arpin not enough to knock Foust from second place.

In GRC Lites, Brooks coasted to an easy second victory of the season after a first-lap incident between Alex Keyes and Conner Martell backed up the rest of the field. Points leader Cyril Raymond managed to hold on to second place for Olsbergs MSE X Forces, with Travis PeCoy taking the final podium spot to put two DRR cars on the podium.

“We pushed it as hard as we could off the start, but we came out third in the first corner,” Brooks said. “I made two solid moves on the first lap, and that gave me a good gap. I just pushed as hard as I could every single lap, and I had the best lap time of the race too, so that boosted my confidence a lot. I know we have what it takes, and I know the Dreyer & Reinbold guys are stoked to have a win here in their hometown in Indianapolis.”
Full Supercar results from Red Bull Global Rallycross Indianapolis are as follows:

The Red Bull Global Rallycross season continues on August 12-13 with the series’ second annual event at Bader Field in Atlantic City. Scott Speed and Alex Keyes will look to defend their victories in Supercar and GRC Lites, respectively, during Rounds 8 and 9 of the 2017 calendar. Tickets remain available at http://www.redbullglobalrallycross.com/tickets. The action can be seen live on NBC on Saturday, August 12 at 5PM ET and Sunday, August 13 at 4:30PM ET.