The Evolution Of Equipment

Just as short course’s format has evolved so has the equipment needed to be competitive. Today’s major events usually have a format of seven separate classes. Although this can vary between the different series. Pro 4, Pro 2, Pro Lite, Pro Buggy, Modified Kart, JR2 Kart and JR1 Kart are the common classes found in today’s events. To go Pro 2 or Pro 4 racing one needs to spend as much as $230,000 for a race ready truck then an additional $500,00 for yearly expenses. The Pro Lite class is way less expensive but still will cost a driver around $85,000 for the race truck. Cost of a Pro Buggy varies but one could spend up to $60,000. The Trophy Kart classes cost estimate are from around $10,000 to $18,000 depending on the class. 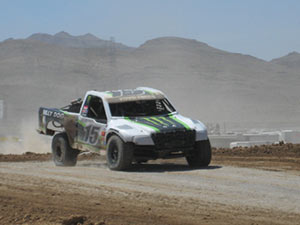 The obvious difference in the Pro 4 and Pro 2 race trucks is the Pro 4 is 4-wheel drive and so Pro 2, 2-wheel drive. These are full-sized tube framed race trucks built from the ground up for short course racing. Both typically run engines of the teams maufacturerer brand preference with 700-900 horsepower. Both will have 18-inches of wheel travel in the front and 20-inches of rear wheel travel to cushion their challenge over the demanding man made racecourses. Both are limited to 93-inches maximum track width. The Pro-4 trucks are allowed 113-122 inches in wheelbase and weigh in at 4000 pounds minimum with driver. The Pro 2 are restricted to 117-inch wheelbase and have a minimum weight of 3750 pounds with driver. The Pro 4 and Pro 2 are the two feature classes racing today. Both run in separate classes but often have a shootout, usually and the end of the season, where both classes are pitted against one another. The Pro 2 are given a half lap lead at the start as the Pro 4 with all four wheels pulling in the corners have a slight advantage. More often than not a Pro 4 driver will win this event but there have been occassions when the Pro 2 take home the money.

The compact pickup market is well represented in the Pro Lite (some spell it Pro Light) class which is built on a standardized chassis of the racers choice. This group started out with only 4-cylinder engines but as the manufacturers started production with 6-cylinder engines the 6-cylinder were also allowed. The 6-cylinder version has a minimum overall weight with driver of 3200 pounds while the 4-cylinder’s overall weight is 2800 pounds, both weights include driver. Both engines are limited to 300 horsepower. Pro Lite’s are supported with 12-inches of front wheel travel and 14-inches in the rear. They have a 106″ wheelbase and 74-inch maximum track width. 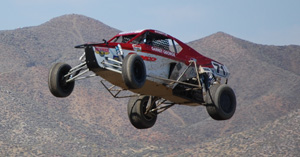 Pro Buggy class has been around since the Roman chariots. Well not quite that long but you get what I’m getting at. Powered by 1650-1835cc engines originally but recently the GM Ecotec 2.4 liter VVTLEV engine was allowed and all are limited to 210 horsepower. A weight difference was applied to the Ecotec motor buggy weighing a minimum of 1820 pounds with driver and the 1650-1835cc cars weighing in at 1800 pounds with driver. The open-wheel cars have a 93-inch maximum track width and their suspension is not limited.

In 2006 Nester Berardi, with manufacturing facilities in Anaheim, CA, introduced a new form of racing entertainment. There is just something that melts the hearts of even old crusty racers when kids take to the track to compete. Berardi had spent two years in designing his a new generation of go-kart for off-road. Calling his new design Trophy Karts he made sure in the beginning they had plenty of off-road wheel travel and enough power to reach speeds of 50 mph. The design incorporates a full roll cage, five point race harness, and fuel cell. Trophy Karts are a scaled down version of the much larger Trophy Trucks with identifiable fiberglass truck bodies. First designed for kids as young as eight years old Berardi later introduced motor/chassis setups for adults. Not only did this relatively affordable class provide entertainment for the fans it has turned into a developmental program for many future racers. Trophy Karts can be found in professional and amateur events across America.

Top of the age group is the Modified Kart class where drivers ages 10-15 years old. These are advanced Karts utilizing 450cc motorcycle engines with 48 horsepower. With the driver inside the truck it has a minimum weight of 815 pounds. As far as it’s size the vehicle maximum wheelbase is 78-inches and has a 58-inch track width. The wheel travel is 13-inches up front and a total of 19-inches rear. 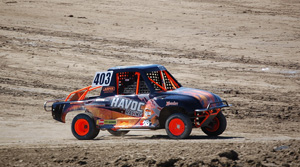 Serving as the intermediate spec class of Karts is the JR2 Kart division for drivers 8-15 years old. These Karts are powered with a Honda GX390 which has 23 horsepower in it’s 390cc engine. They are a bit shorter than the Modified cars at 73-inches wheelbase and have a 58-inch track width. These Karts share the same wheelbase as the modified with 13-inches front and 19-inches at the rear. Minimum weight including driver is 665 pounds.

The beginning class of JR1 Kart competitors range from 8-15 years old. Their equipment is powered by a 13 horsepower Subaru EX27 266cc engine. They share the same suspension as the JR2 class but they are a bit shorter at 71-inches maximum wheelbase and have a max track width of 56.75-inches. Minimum weight with driver is 585 lbs. 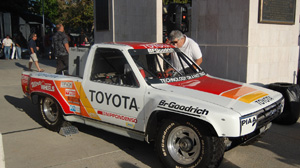 The Speed Energy SST trucks are each identical. The SST crew built templates and laid out a production line to produce the short wheelbase trucks. Being identical helps with between race repairs so instead of having to fabricate a broken front end a spare is standing by for quick installation. As for performance each puts out 600 HP from the 427 Cu. In. EFI V8 engines. To deliver the horsepower they are equipped with a three speed TH400 transmission. Each truck has a minimum weight of 3000 pounds spread over the 105 inch wheelbase and 70 inch track. Front suspension is 18 inches with the rear traveling 20 inches.