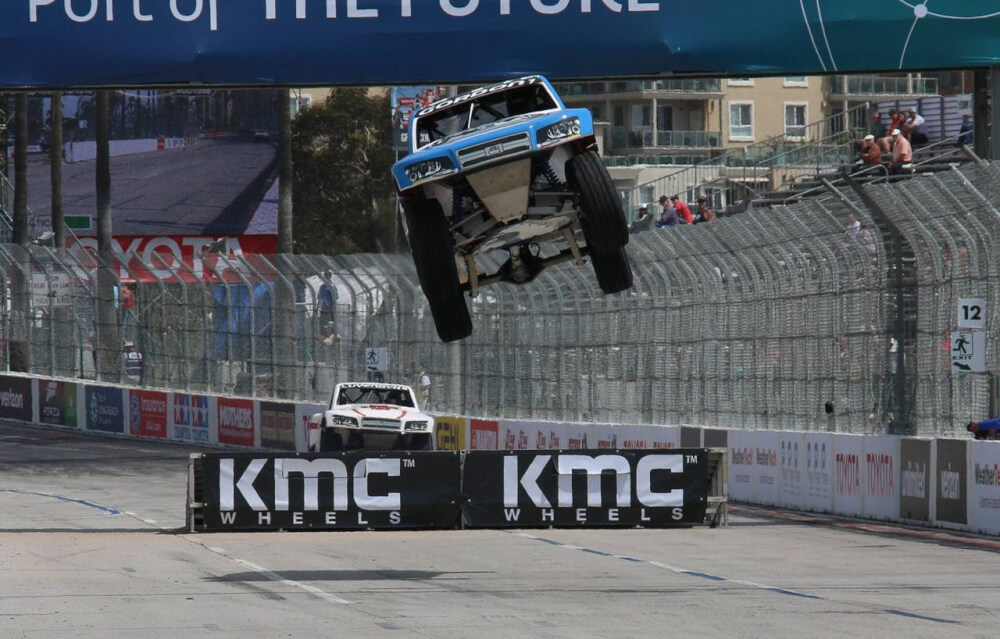 SPEED Energy Stadium SUPER Trucks continue the 2017 World Championship with its fifth straight appearance at the famed Grand Prix of Long Beach this weekend with Race 1 on Saturday and Race 2 after the completion of the IndyCar event on Sunday.

Last year’s race on the streets of Long Beach saw Sheldon Creed withstand a carnage filled Race 1 to capture the win by a huge margin, while Race 2 saw series founder Robby Gordon and Sheldon Creed put on a show for the ages battling back and forth the final 3 laps of Race 2 until Pat O’Keefe went for a wild highlight reel roll over on the front stretch to end the race. Robby Gordon would take the win from wowed the crowd of more than 100,000 spectators by finishing the race by bicycling his Arctic Cat sponsored truck on two wheels.

The exciting finish left a memorable mark on the fans attending the race and hopes to deliver the same type of excitement this year.

“It was an honor in 2013 that Jim Michaelian (Long Beach Grand Prix president and CEO) invited us to race at Long Beach, and it remains the same today,” said Robby Gordon, who founded the series in 2013. “The Long Beach race has always been a legendary stop on the IndyCar circuit and the opportunity to race hard and put on a show for the Southern California fans is the premiere stop of our North American season.

2017 will mark the 43rd year of racing for the longest running street circuit race in the United States.

The starting lineup for Saturday’s race was determined from each driver’s fastest lap time in Friday afternoon’s qualifying session. Following the qualifying session, a full field inversion from fastest to slowest was put in place, meaning Bill Hynes, from Nazareth, Pennsylvania, will start from pole alongside Troy Diede of Lodi, California making his first ever SST start on pavement.

Making his return to Long Beach since a successful run in 2014 Gavin Harlien of Mesa, Arizona will start in the seventh position, along side veteran driver P.J. Jones of Scottsdale, Arizona.