Stadium SUPER Trucks Return Down Under

Sheldon Creed won Round 1 in Perth 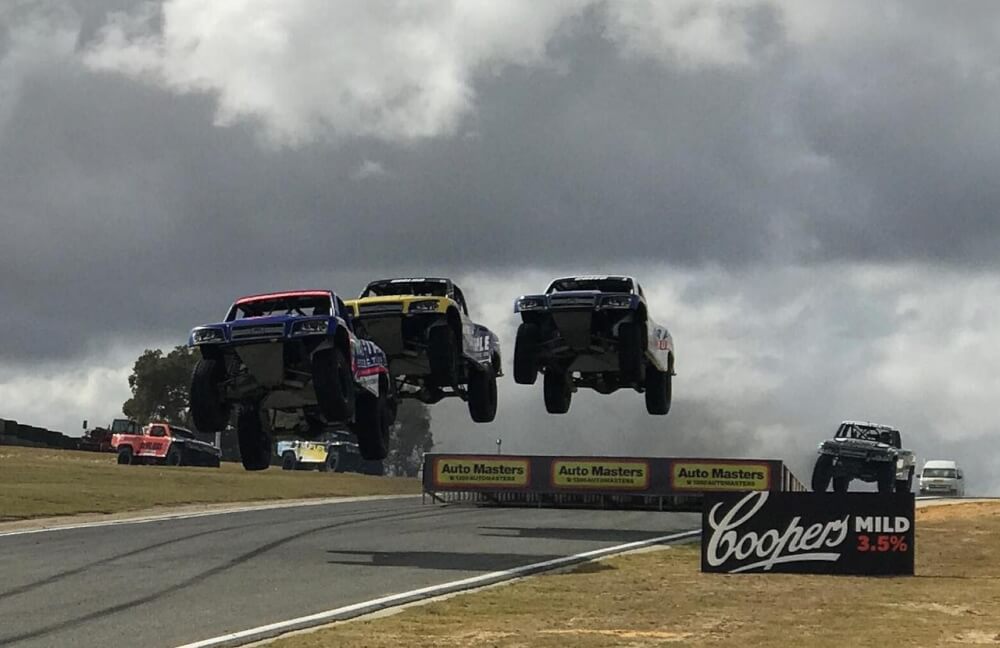 Unlike the past events with the SuperCars Championship in Australia the SST’s will compete on a purpose built road course for the first time in the history of the series opposed to the street circuits at previous venues.

In typical SST fashion the trucks will navigate over four 30-inch-tall specially designed ramps located in prime fan-viewing locations throughout the 8-turn 1.094-mile (1.760 km) circuit. The crowd-pleasing ramps will catapult the trucks and their drivers nearly 20 feet (six meters) in the air and as much as 150 feet (45 meters) down course much to the delight of the anticipated capacity crowd.

The starting lineup for Friday’s Race 1 was determined from each driver’s fastest lap time in Friday mornings qualifying session. Following the twenty-minute session a full field inversion of the times would place the drivers in their proper starting spot for Race No.1; Stadium SUPER Trucks newcomer Beau Robinson, from Perth, Western Australia would earn the pole position alongside veteran Bill Hynes of Nazareth, Pennsylvania.

Row two will consist of Shaun Richardson of Scunthrope, United Kingdom and Craig Dontas from Adelaide, South Australia who will be looking to back up his victory back in March at the Clipsal 500. Making up row three will be a pair of South Australian’s Greg Gartner from Penola and Travis Milburn from Adelaide.

The fifth row will feature Mesa, Arizona racer Gavin Harlien making his second trip to Australia in the Royal Purple backed entry. After missing the last event at Long Beach El Cajon, California driver Sheldon Creed will line up next to Harlien.

Rounding out the sixth and final row will be a pair of Gold Coast, Queensland natives both with new livery’s for the weekend Paul Morris in the Ridge Ryder 4×4 Accessories truck and today’s quick qualifier Matt Brabham driving for DeVilbiss.

Fans can tune into the race by visiting http://www.stadiumsupertrucks.com or by viewing the Stadium SUPER Trucks Facebook Live at http://www.facebook.com/StadiumSuperTrucks.

*Fans in Australia and New Zealand will be GeoBlocked from LiveStream and can tune in LIVE on Fox Sports. Check you local cable or satellite provider for channel details.