Stadium SUPER Trucks Round One

One Voice For Off-Road Motorized Recreation

Stadium SUPER Trucks SST opened their 2018 racing season at Lake Elsinore Diamond Stadium before a sell out crowd. The fans enjoyed a full day of action as qualifying started midday for the UTV 170, UTV1000 and the 1400 desert trucks. To open the show the SST qualified in front of the fans giving them a taste of the racing action to come later. 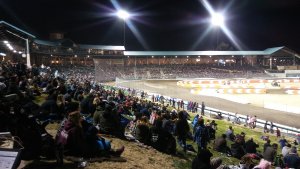 A sold out crowd enjoyed the opening round.

Robby Gordon took time from promoting the event to race in the first SST heat of the evening. Once the green came out Gordon quickly established himself the leader but would later feel heat from Jeff Hoffman and Apdaly Lopez. But as the eight lap event came to an end it was Gordon taking the checke 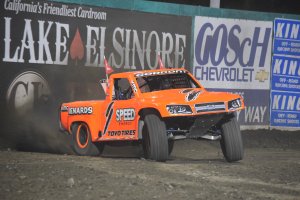 Robby Gordon won the first SST heat and led most of the main.

rs. Hoffman crossed over second with Lopez third. The ladies favorite bachelor, Arie Luyendyk Jr, was fourth. Another field of six SST made up the second heat with this time Sheldon Creed   taking the checkers with Cole Potts coming across second and third was Gavin Harlien.

A last chance to qualify into the main brought out four trucks as Matt Brabham and Lalo Laguna DNS. Current SST Champion Jerett Brooks had his share of trouble in the first heat race but came back in the LCQ to earn his spot in the main. Arie Luyendyk Jr was second with Blade Hildenbrand third.

The main event included 12   SST competitors. When the green flag started the event Jeff Hoffman would lead Robby Gordon into turn one. It didn’t take long before the course became the typical battle ground as all 12 contestants wanted the win. At first the main battle was between Robby Gordon and early leader Jeff Hoffman. Gordon would get around Hoffman but Hoffman then retook the lead by cutting inside After the competition yellow Apdaly Lopez managed to take the lead after leaning on Gordon and Sheldon Creed was also able to pass Gordon. Hoffman was next to get past Gordon but then stalled after the crossover jump. 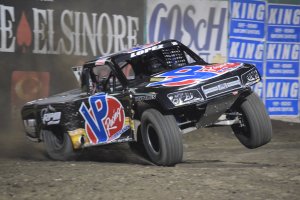 Apdaly Lopez got hung up on the wall in the heat race but cam back in the main for the win.

Then Gordon was once again able to take the lead after the crossover jump Lopez pressuring him in second. Blade Hildebrand caused a yellow and on the restart with one lap to go Lopez saw Hoffman take the lead but then was able to take the lead from Hoffman just a couple of turns later to go on for the win. Jeff Hoffman was second with Gavin Harlien third. Robby Gordon finished fourth. 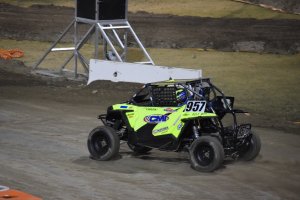 In the UTV 1000 main event Myles Cheek and Ronnie Anderson provided plenty of racing action throughout the 12 lap event. The two swapped the lead throughout with Cheek making the final pass. Ronnie Anderson crossed over second With Shelby Anderson third. 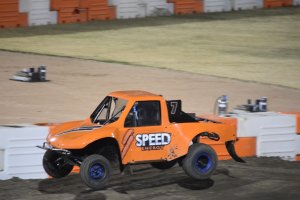 Max Gordon took the overall in the combined Mod Kart and UTV 170 class that was won by Chase Carr.

There was an eight lap main for the UTV170 which was combined with the lone Mod Kart of Max Gordon. Gordon was set back a half lap on the start but easily caught and passed his way to the overall lead. Chase Carr was able to set a pace in the UTV170 class that Colin Miller was not able to match. As the checkers flew it was Carr taking the win with Colin Miller second and George Ilamosa third. 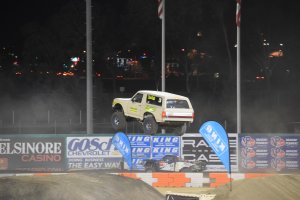 The 1400 desert trucks provided and amazing amount of action with the Bronco driven by Micheal Cox easily clearing the cross over jump in this drive to win. Jeff Musgrave crossed over second and Nick Tonelli was third. The event was called after six laps when one contestant (I believe it was Dustin Loppnow) flipped over on one of the doubles landing rubber side up. The time it took to upright the truck and due to the noise laws of the area the race was called after six laps.

Click on Red the Full Article for race videos. 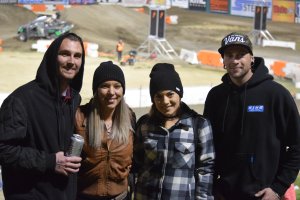 Just a few happy fans after the race.