Even short course fans enjoy desert racing so when the opportunity to run SCORE-Internationals 53rd Baja 500, with Can-Am’s No Limit Race Development team, I packed my bags and headed south.

Once underway a quick stop at the San Diego airport was needed to pick up No Limit’s Beau Judge, who usually runs as navigator for team owner Phil Blurton. With the teams sights set on the Baja 1000 Beau would get his time behind the wheel in the 500. As it turned out Beau’s regular co-driver was scheduled in later in the week so I was chosen to pre-run with him.

On day one of the pre-run I got strapped in and soon found out the very talented Beau Judge was ready to take on Baja. Our ride began at the course 240 mile marker and ran to the finish. Honestly I was expecting a much leisurely ride than what Beau had in mind. Fortunately for me I realized his talent and expect for a few Oh Shit moments was able to enjoy the ride. These moments would produce a chuckle from Beau but not enough to loose his concentration.

The first part of our section began in the wash south of San Quintin as we headed further north the terrain got a rougher. There was a short section that ran on the beach, but it didn’t last long. Midway, just past Colonet, Baja showed me some of her roughest, rockiest, and unforgiving terrain yet; to the point my Oooh Shhiiit moments sort of stuttered. Further north was a section of trees that the course snaked its way through. This was an interesting spot as the sun was producing some heavy shadows. Glad I had the capable hands of Beau passing us through this difficult section as I lost my concentration more than once, and would have brought back some tree bark with us. Not to much further my joy ride ended as the pre-run came to an end with us traveling back on Hwy 3 to Ensenada.

Since I didn’t throw up in my helmet, or cry to much during my pre-run adventure they let me hang around for the race.

Having some knowledge of Baja I was given the Chase One truck. Our pit was up on the Mike’s Sky Ranch road at race mile 142. We hurried out there and as usual set up and began our wait. When the car arrived it was running second in class. A quick visual over it confirmed all was okay, once fuel was added they were off in under a minute. So Alex Flores and I began packing up, which took about 30 minutes and then we were headed to Valle de la Trinidad for some fine tacos. After lunch we headed back down to where the racecourse came back to Hwy 3 to set up another pit in case anything was needed on their return.

If one wants to pit in Baja you have to be patient, as it would be nearly six hours before the car would be back to us. We were ready with fuel and spare tire as well as all necessary items to keep them going. After standing by for several hours they drove past without needing anything. So, once again we loaded up and headed back to our hotel since our part of the race was over. 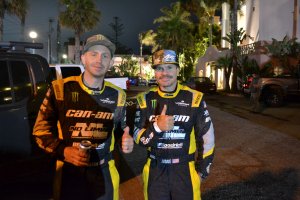 Phil Blurton and Beau Judge first UTV at the finish but penalties dropped to second.

Racing in the Pro UTV Forced Induction class their effort was #2944 for the Baja 500.  At the finish line they were the first to cross under the checkers and declared Class Winners. It would be after midnight before they got back to the hotel Las Rosas. Being so late the celebration was a bit subdued but congratulations were eagerly spread around. It wasn’t until days later that official results posted and dropped No Limt to second. On the last section the car had a flat and had sway bar troubles. Worse yet was that some VCP (Virtual Check Points) were missed causing penalties that dropped the team to second. The VCPs were problems for many, in fact SCORE had three pages listed of them and other violations.

This race effort proved No Limit R&D Can-Am are a source to be reckoned with so you can expect them back in Baja.