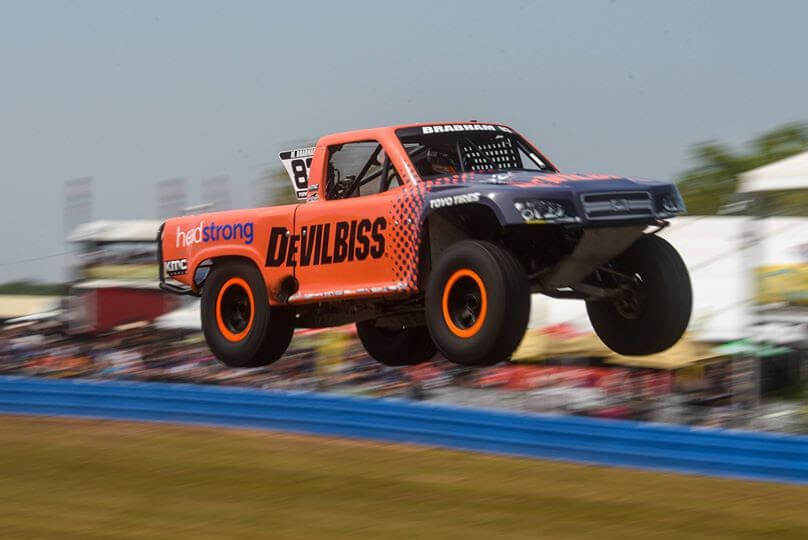 Jumping out to an early lead from his fifth starting position Matt Brabham from Gold Coast, Queensland wasted no time setting the pace of the event working his way past truck after truck to the front. Following in the Toyo Tire tracks of Brabham was Detroit and Texas overall winner Gavin Harlien of Mesa, Arizona.

Harlien showed how fast his Royal Purple Synthetic Oil truck was today sliding back and forth all over the track, going off in the grass, and still able to come within a truck length of Brabham for the lead. As Harlien would challenge Brabham for the lead multiple times, he would never be able to keep the No. 55 truck in front of the smooth driving Brabham.

While the two young hot-shoes were battling hard for the lead, savvy off-road veteran Robby Gordon of Orange, California was making a charge to the front of the pack from his seventh starting position. After a late race red flag that saw Gold Coast, Australia driver Paul Morris flip over on his side. Gordon used that to his advantage to dive to the inside of multiple trucks on the restart including Harlien placing Gordon in the second position.

The last corner would see Harlien get by Gordon for second place, as the Gordon truck would run out of fuel. Spitting and sputtering the SafeCraft Safety Equipment truck would coast to a third place finish.

Brabham would go on to capture his third victory of the 2017 season ahead of Harlien, and Gordon.

TruFuel 50:1 driver Jeff Hoffman of Phoenix, Arizona would continue his weekend of respectable finishes racing hard in the top five again throughout Saturday’s event to be recorded in the fourth position.

Craig Dontas from Adelaide, South Australia finished fifth in the Shannon’s Insurance entry driving a great race, keeping all panels on the truck to break his bad luck streak that started after capturing victory at the Clipsal 500 back in March. Fellow South Australian Greg Gartner from Penola would start in the second position, and drop back to mid pack by Lap-2 after getting off track several times. Settling into a good rhythm the driver of the R & J Batteries truck would be credited with the sixth position.

Race 1 winner Paul Morris of Gold Coast, Queensland was credited with the seventh position in the Morris Finance truck after making contact with the wall thru the front stretch chicane. After coming to a complete stop Morris would climb up the tire barrier, and tip over bringing out the red flag. The SST recover crew would tip the No. 67 back on four Toyo Tires and let him continue.

Bill Hynes of Nazareth, Penn. would be credited with the eighth position after encountering transmission issues on the warm up lap in the Road Pod Transport Transformed truck. After starting from the first position and leading the first two laps not having completely working transmission would be too much for the veteran driver, as the rest of the field would navigate past him as he struggled to keep pace.

The Stadium SUPER Trucks finale of the Darwin Triple Crown weekend at the Hidden Valley Raceway will be contested Sunday afternoon at 4:30 P.M. local time.