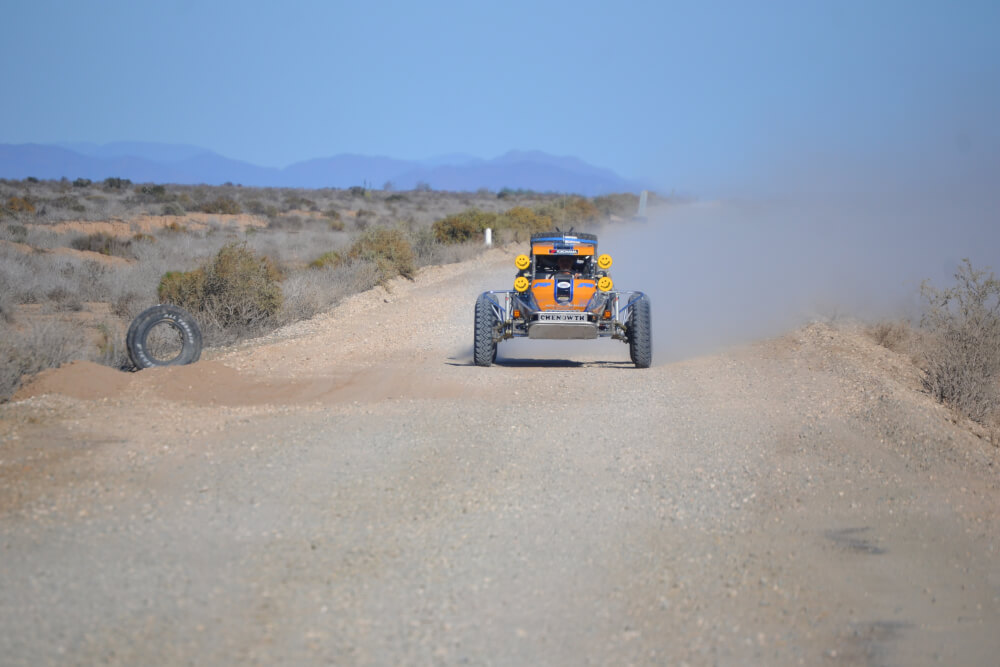 The SCORE-International Baja 1000 turned 50-years-old this November. I know, it is not ShortCourseRacer.com normal event coverage but with such an historic event happening we couldn’t help but jump onboard knowing we were going to do the event with a vintage racer. Baja racing conjures up many fantastic stories, following is ours. 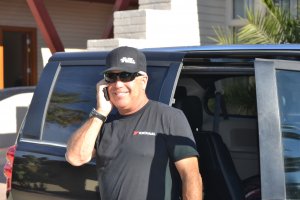 It started from a phone call from Glenn Harris, California Gold Racing, that we were getting “The Band together again.” A bit of a pun, but the call was there. Having teamed with Harris for many years I knew we were in for a good time, which equates to long hours and hectic chasing.

Several old friends gathered to chase the vintage V129 racecar owned by Dave Tilton and Bob Lawrence. The two had rebuilt the nearly 40 year old Chenowth and were eager to debut it in the newly offered Vintage Era 1982 & Earlier class for the Baja 1000 anniversary event. 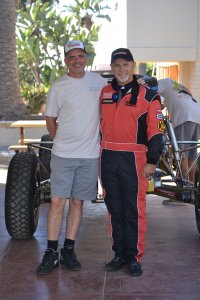 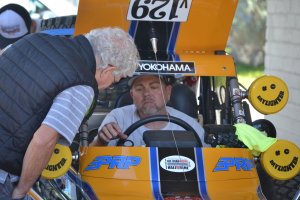 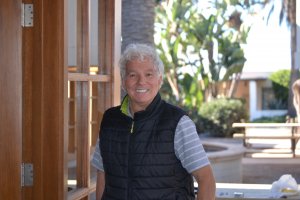 The driver’s list offered up a mix of racing talent. Besides Harris, Pete Alesi Jr started the race. Harris took the second leg with John Holmes getting in at the Bay of LA. Bob Lawrence was scheduled next then Bobby Ferro. Jake Johnson was to power on to the finish line. Beside the drivers chasing “The Band” of chase crew V129 consisted of David Akazawa, Will Drummond, Homer Eubanks and Bob Gray. Newcomers to our group were Phil and Phillip Blurton. Phil Sr. raced many years ago making a perfect fit with the vintage race team. His son, Philip Blurton, of No Limit Race Development, or you may know him as being the 2017 UTV World Champion. My guess is we can see the No Limit race team racing Baja in 2018.

Before each race there is customarily a team meeting to acquaint everyone of their duties. As any Baja racer knows what looks good on paper can, and most likely will, change. We listened to the game plan and headed out with great expectations.

On Thursday, race day, the crew spread out headed for their pre determined support location. Being part of Chase 3 we were to wait until the car took off and head down Hwy 1 to the Bay of LA. Having some time before leaving we were lucky enough to find a spot near the start line and watch as the racers took off. Once V129 came by us with Pete Alesi behind the wheel we headed south around 1:30 PM.

Thanks to today’s instant electronic communications we were informed the car was running good. A problem with the power steering unit popped up but was quickly taken care of. When the car reached San Felipe, Glenn Harris took over the driving duties and headed south. I might add in here that it was reported by many that this year’s race course was rough and dusty.

As the hours slowly rolled by radio reports informed us the car had carburetor issues. It appeared the reason for poor fuel mileage was the carburetor was pushing fuel out the top gasket.

Nearing midnight the car arrived at the Bay of LA. None to soon for me as I had been struggling with the attempt of sleeping in the front seat of a Ford pickup. The back seat was filled with luggage and race crap so the front seat was all I had. And I can tell you after trying at least 859 different ways to get comfortable that sleeping in an upright truck seat is not recommended. So once the car arrived we were able to get out and check the car over. Harris handed the car over to John Holmes and with some minor carburetor adjustments (a little love tap to un stick the floats) the car was again sounding good and headed to La Paz.

With the car headed south most of the chase crew was again on the road. At this point it appeared V129 was 80 miles ahead of it’s nearest competitor. With Baja racing there are highs and lows, and the lows started later when we found out the car had broken a tie rod end around 4AM. For some reason the racecar radio wasn’t working but through the new Stella III tracking system we saw it was setting. Around sun up our closest competitor broke at the same location and lucky for us he had a working radio. Turns out a Mag 7 pit was just a couple of miles from where both cars sat. A Mag 7 crewmember came down and was able to weld the tie rod end back on. The V129 was running again. But! The temporary fix didn’t last and the car again was down without steering. That is when Holmes decided to three-wheel it. He removed the front wheel and undid the suspension, tied up the hanging parts and strapped down the opposite rear suspension to help hold up the broken limb. This fix got him another 60 miles before pulling off at the El Arco road to meet with chase for repairs. 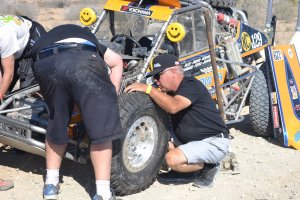 Another tie rod end was installed and with further inspection determined the steering linkage would need further design change for future races. While this work was going on, the top of the carburetor was taken off and the float bowl was reset to ensure the sluggish throttle response was fixed.

It was determined that time was running out for that stage but Bob Lawrence decided to give it a try in hopes of getting to the next check before they closed. The car was running good and Lawrence drove back to the course and headed south. Unfortunately the steering linkage confirmed the fact that a redesign was in order and the inner tie rod broke yet again. 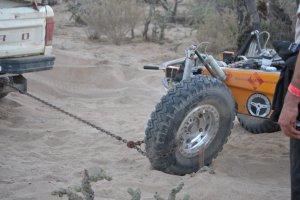 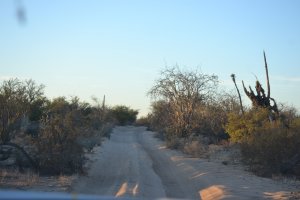 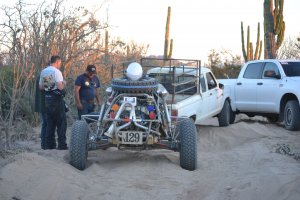 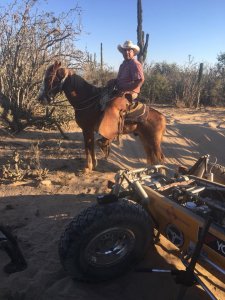 The El Arco section, which I understand was part of the original 1967 racecourse, has thick vegetation on each side of the course. With the car setting in the middle of the course Lawrence was busy trying to get it moved to one side. The left front wheel had pushed back 90-degrees making it a perfect plow in the soft sand, hindering his attempts Out of what appeared to be nowhere rode up a Vaquero, complete on horseback with chaps and cowboy hat. Not speaking any English, and Lawrence limited in his Spanish, the two tried to work together to move the vehicle. In another “only happens in Baja” moments, a couple of other locals drove up in a 4×4 Ford Ranger. They were able to attach a chain to the front wheel and yank it from it’s due east position to a heading back south again. About this time is when myself and John Holmes found them working on the car. With us there the two locals headed on home and left the retrieval to us. I stayed with Bob Lawrence while John drove to retrieve the tie rod end. With the front wheel pointed in the right direction I helped keep it straight as Lawrence moved the car off course. Shortly after dark John showed back up with Bob Gray and Will Drummond. Those two quickly made the temporary repair. Being in the soft sand Lawrence tried several attempts to free the car but lost reverse making it necessary for Holmes to drag the car around with his Tundra. A little funny happened then. As we were unhooking the tow strap someone hollered whoa to the Tundra and Lawrence thought they said go. Luckily we had unhooked from the Tundra but the tow strap was still attached to the car. We had a chuckle with the thought of see the car standing straight up in the air should the strap get caught on something.

As it turned out Lawrence was able to drive back to El Arco without mishap. He then said, “We hoped for better results, especially after leading early on. This serves as our test and we will go back and make some suspension changes. We plan on racing NORRA and would like to find a race before to make sure the car is ready.”

Once on the trailer it was time to admit defeat of V129’s attempt at the SCORE-International Baja 1000 50th anniversary race. I think it was around 7:30 PM so our race effort lasted roughly 30 hours. 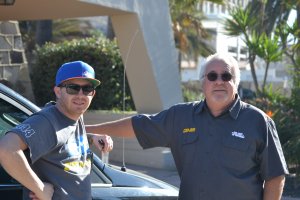 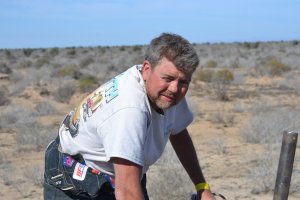 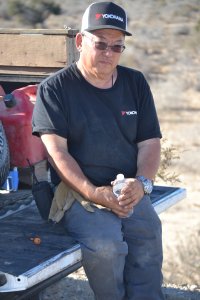 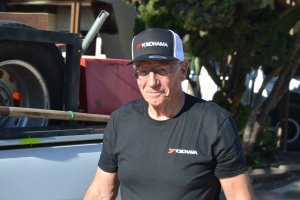 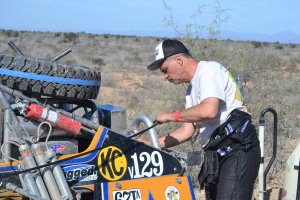 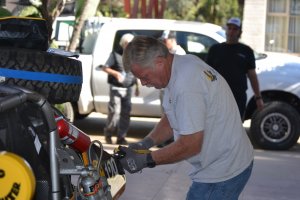