Sheldon Creed Wins Round 3 in Australia

Creed, a native of Alpine, Calif., driving his No.1 TRAXXAS-sponsored truck and Orange, Calif. driver Robby Gordon in the Arctic Cat/ Toyo Tires No. 7 entered the race one and two overall in the weekend point standings. Meaning the two ultra competitive drivers would put on a show starting the 8-lap event from the last row. 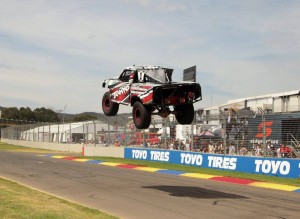 From the drop of the green flag the weekend struggles for Australian stuntman turned racer continued, as Matt Mingay would start from the first position after crashing his Hot Wheels/ Castrol EDGE backed truck hard on Saturday afternoon. Mingay would lead the first lap but quickly surrendered the lead position to Los Angeles, Calif. racer Burt Jenner. Lap-3 would see Mingay tangle with Aberglasslyn, New South Whales driver Toby Price spinning Mingay parallel on the front stretch ramp causing all drivers to scatter from hitting him.

The charge to the front by Creed and Gordon would take full force on Lap-2 moving through the field passing truck after truck ultimately dodging the spinning carnage in front.

The Lap-5 restart would see Creed work his way past leader Price, and never look back as Gordon and Creed would break away from the rest of the pack three wheeling and putting on a driving performance for the ages maneuvering their 600-horsepower TRAXXAS trucks around the track much to the delight of the ecstatic crowd.

Gordon would close the gap on Creed the final two laps, but would run out of time as the 18-year old off-road standout would go on to win his 15th Stadium SUPER Trucks race of his young career.

Matt Brabham driving the United Fiber & Data/ LIVE/ Think Loud Development No. 83 would start in the ninth position and would quietly work his way through the chaos to finish in the third spot.

TRAXXAS racer Keegan Kincaid of Crandon, WI., would cross the finish line in fourth position behind Brabham after spinning early in the event and having to work his way back through the pack.

Saturday’s winner Burt Jenner would go on to finish fifth in his SPEED Energy/ Toyo Tires No. 50 after leading four laps and tangling with a fellow driver on Lap-6 falling back, Jenner would be followed to the finish by Penola, South Australia Off-Road racer Greg Gartner in the R&D Batteries/ Delkor Calcium Battery/ Fuchs No. 500 who would finish sixth.

Sixth place starter Toby Price of Aberglasslyn, New South Whales would work his way to the second position behind Jenner on Lap-6 before contact with fellow Australian Matt Mingay would spin the both of them. Price would be credited with the seventh position, while Mingay’s horrific weekend would continue with him finishing in the eighth spot.

Santee, Calif. driver Robbie Pierce in the Royal Purple Synthetic Oil No. 30 ran a great first four lap’s before getting turned around on the final lap and loosing valuable ground to the lead group ultimately crossing the finish line in the eleventh position.

First time SST driver Travis Milburn of Adelaide, South Australia would encounter troubles on Lap-4 bringing the No. 25 Move Yourself Trailer & Ute Hire to the pit lane falling out of the event.

The overall standings over the three races would see Sheldon Creed first, with Robby Gordon claiming second, and Matt Brabham rounding out the top three. 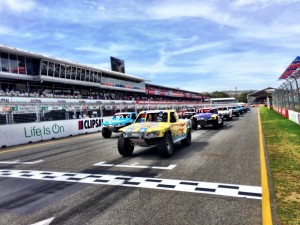 Influenced by the former Mickey Thompson Stadium Off-Road Racing Series, where drivers such as Gordon, Casey Mears and six-time NASCAR champion Jimmie Johnson got their start, Gordon created SST in response to the public’s overwhelming interest in trucks and off-road racing. His plan to re-launch the former stadium series has led to exciting racing on both asphalt and dirt, while producing one of the most extreme forms of action sports today.

Other than the trucks launching 20 feet in the air covering distances more than 150 feet, what sets the SST program apart from other series is the fact that all the SST trucks are identically prepared and delivered to drivers in race-ready condition. Race winners are decided by driver skill rather than individual team engineering and budgets. Drivers and their personal mechanics are assigned specific SST mechanics who together tune and make minor adjustments to the 600-horsepower trucks.