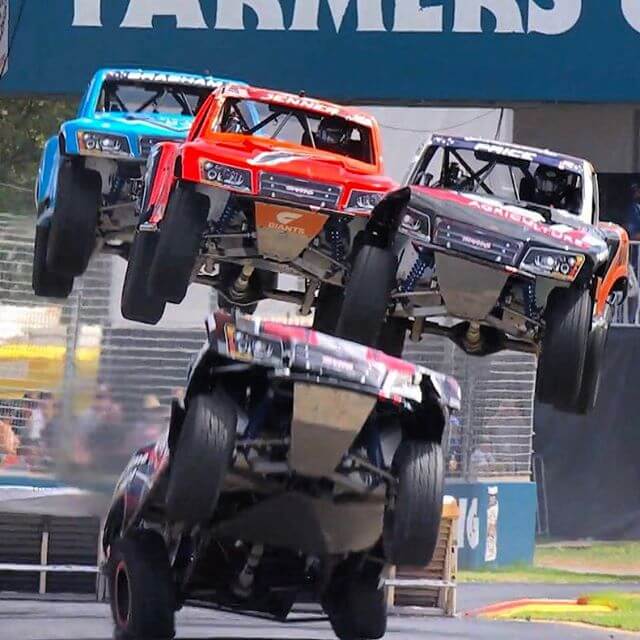 The fifth season of SPEED Energy Stadium SUPER Trucks will kick off this weekend in Adelaide, South Australia when 12 identically prepared Stadium SUPER Trucks (SST) will hit the Victoria Park Street Circuit for Rounds 1 through 3 of the year long 2017 SST World Championship.

Similar to the last three season openers in Adelaide, the SSTs will once again race the same 14-turn 2.012-mile (3.219 km) street circuit built for their much different counterparts from SuperCars, however, unlike the SuperCars the trucks will navigate over five 30-inch-tall specially designed ramps located in prime fan-viewing locations throughout the circuit. The crowd-pleasing ramps will catapult the trucks and their drivers nearly 20 feet (six meters) in the air and as much as 150 feet (45 meters) down course much to the delight of the anticipated capacity crowd.

The starting lineup for Friday’s Race 1 was determined from each driver’s fastest lap time in Thursday afternoons qualifying session. Following the twenty-minute session a full field inversion of the times would place the drivers in their proper starting spot for Race No.1; Bill Hynes, from Nazareth, Penn.; would earn the pole position alongside SST newcomer Jeff Hoffman of Phoenix, Arizona making his first ever SST start.

Row four will consist of Travis Milburn of Adelaide, South Australia, Aus.; making his return to SST racing since debuting at last years Clipsal 500. Next to Milburn will be veteran Aussie racer Paul Morris of Gold Coast, Queensland, Aus.

The fifth row will feature Aberglasslyn, New South Whales, Aus.; racer Toby Price making his return to racing after suffering an injury at this year Dakar Rally in January that has required weeks of rehab. Along side of him will be a driver that is no stranger to the Dakar Rally Orange, Calif. driver Robby Gordon.