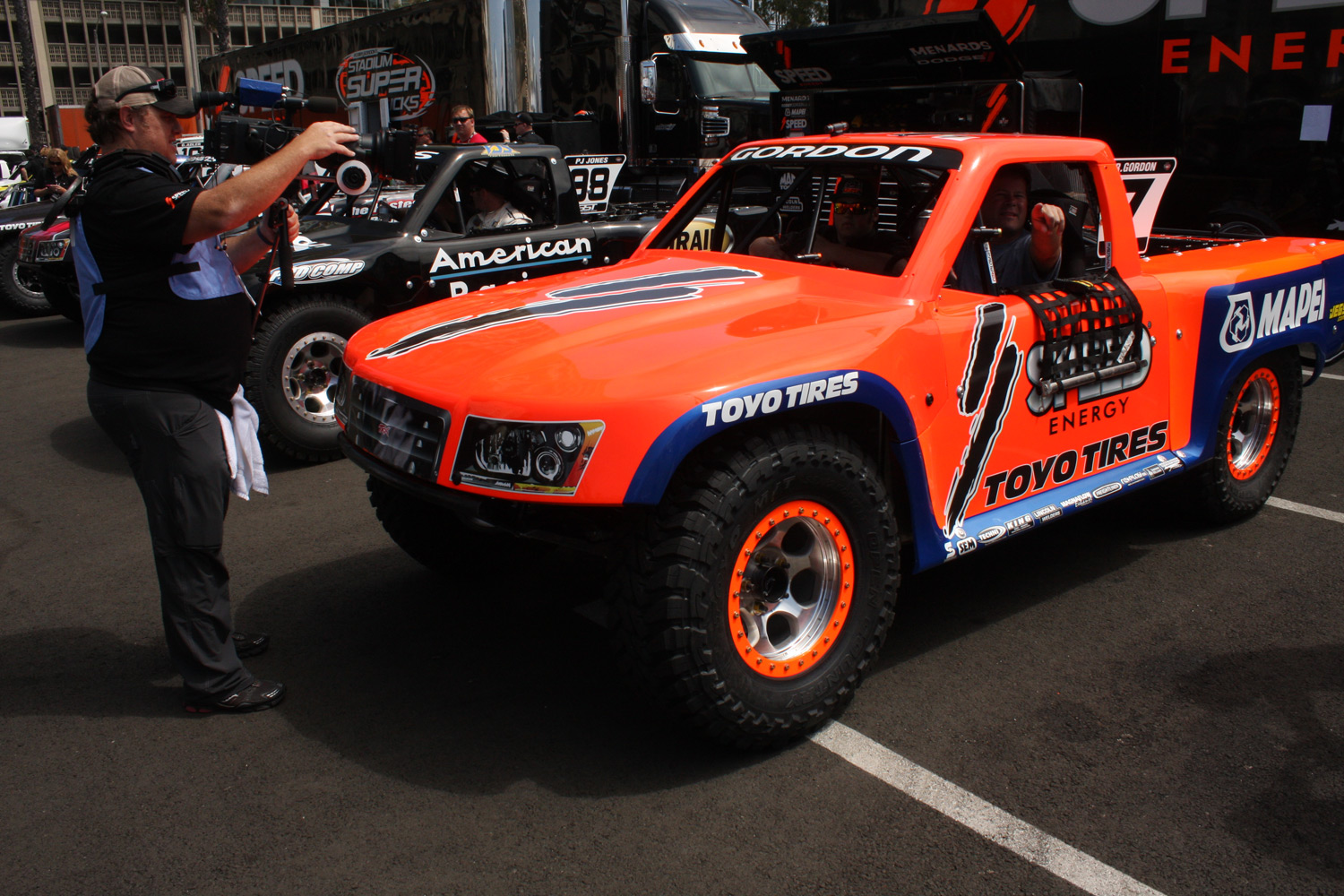 San Diego, CA Round four of the Speed Energy Stadium Super Trucks SST series was held in San Diego, Ca at Qualcomm Stadium. The event continued with its fan appreciation by kicking off the day with the Ultimate Off-Road Expo and by opening the pits to fans. To get fans up close and personal fans were also invited to walk the track during a driver autograph session. Once all the hoopla was over the fans were entertained with Monster Trucks eliminations, Super Buggy and Super Trophy Karts before the Stadium Super Trucks capped off the show. There was a nice crowd count and all seemed to enjoy the show.

The Robby Gordon designed track kept fans entertained as race vehicles were flying over competitors with two separate huge jumps making this a supercross form of truck racing. The track offered two separate two-lane options intended for passing but each were so equal little passing occurred unless one competitor made a mistake. But by being equal the fans were excited as two competitors often exited the options side by side, or at the end of the other option found themselves negotiating a fender bending decision at a 180-degree intersection. If that wasn’t enough Gordon incorporated a couple of paved corners to test the driver’s skills. When asked about the new series Ricky Johnson said, “Its a new series and Robby is trying new things so we are all on a learning curve.”

In a change from previous events the Super Trucks first heat began the show. There were a total of seven SST on course with Arie Luyendyk Jr on pole with Mike Jenkins second in a staggered start. On the opening lap Luyendyk and Jeff Ward met at the option intersection and the two got tangled up allowing Justin Loftin to grab the lead. Behind Loftin was Rob MacCachren and Jenkins. A lap later series newcomer Shelden Creed, who qualified third quickest, got past Jenkins for third. The front two, Loftin and MacCachren, were running nose to tail with Creed back a ways but still within striking distance. A couple of laps later Creed had a front flat and ran up on top of the barriers ending his race. This put Jeff Ward into third and Robby Gordon was a distant fourth. On the next lap Ward had trouble in a corner and got hung up but was able to get going and maintain position. Driving under the checkers first was Justin Loftin and Rob MacCachren held on for second. Jeff Ward was third.

Another set of SST competitors came out for heat two and this time Justin Matney was on pole with Jerett Brooks second. PJ Jones started third with Nick Baumgartner fourth. On the start Brooks stalled on top of the finish line jump holding up the pack to create a restart. Once racing again Matney and Jones got tangled up at the switch back intersection but Jones was able to get loose for the lead. Brooks was second and Ricky Johnson had moved into third. Jones was distancing himself from Brooks until a caution came out when Lalo Laguna nose dived off one of the huge jumps. Laguna had pulled off track earlier and must have had a mechanical issue not giving him enough speed to clear the jump causing him to smack into the face of the landing. His truck front end was smashed but he was able to walk away. On the restart Jones held the lead but Johnson was quick to steal the second spot from Matney. As the laps counted down Jones was able to pull some breathing room from Johnson and went on to take the win. Rick Johnson held second and Justin Matney was third ahead of Greg Adler.

In the SST LCQ yet another seven trucks came out to battle. Robby Gordon who had been the fast qualifier, but experienced a bad showing in his heat, sat on the pole with local Sheldon Creed second. Once green, Gordon quickly established himself the leader with Creed second and Nick Baumgartner third. Baumgartner had complained of steering issues and it showed as he spun out and had to watch as the rest of the pack got by him. While running in third Greg Adler suffered handling issues on the pavement just before the finish line flipping over and coming to rest on this lid. On the restart Mike Jenkins was third but couldn’t hold off Arie Luyendyk. His new third place spot didn’t last long as he lost his drive shaft on the next lap giving back the spot to Jenkins. Mike Jenkins’ trouble continued on the last lap as he stalled in the left sweeper allowing Brooks to take the final podium spot after Robby Gordon crossed over first and Sheldon Creed was second.

With 14 SST competitors on course for a 20 lap main event fans were guaranteed plenty of action. Rick Johnson enjoyed the front starting spot but had the ever charging Rob MacCachren second. Justin Loftin was lined up third with Jeff Ward fourth. And after his hard crash in the heat race Lalo Laguna lined up at the back of the pack. On the start Brooks dropped out in the first corner. As expected Johnson took command with MacCachren shadowing his every move and keeping them both honest was Loftin in third. The front three looked like a connected freight train as they were nose to tail for several laps. Back in the pack Robby Gordon, running sixth, stalled but was able to get back into action before dropping to many positions. During this shuffle Loftin dropped back allowing Johnson and his shadow, MacCachren, to pull away. Robby Gordon had moved to third. Just then Greg Adler spun out in the right hand sweeper causing a yellow to stop the race. On the restart Johnson held the lead as MacCachren dropped to third when Gordon stole his spot. Racing was again stopped on the next lap when Loftin got his truck on its side. On the restart when they came to the left or right track option Johnson for the first time in the race took the left option. When he and Gordon met at the intersection Gordon took the lead with Gordon holding onto second and MacCachren was third. Running order remained the same for several laps before yet another caution brought out a restart. Things got crazy on the restart as Johnson got up on two wheels in a corner and MacCachren ran underneath his truck. While running fourth PJ Jones tried to avoid the clogged corner by taking the second option but he dug in his front end and rolled causing action to again stop. The next restart went smoother than the last except this time Arie Luyendyk and Jones came out of the option side by side and traded paint all the way through the rough section. Jones then stalled out and Luyendyk took over the fourth running spot. Next lap, while leading Robby Gordon got his front end up on a barrier and Johnson quickly took advantage for the lead. MacCachren also got by Gordon and Gordon had shook loose of the barrier to recover third. Throughout the event MacCachren challenged Johnson to no avail. Then on the last lap as Johnson was struggling with a right rear flat he and MacCachren went down the rough section bouncing off each others door. With the flat tire loosing traction Johnson couldn’t hold off MacCachren’s charge allowing MacCachren to steal the lead with only one turn to go. Rick Johnson held on for second and Robby Gordon finished third. Missing the podium was Arie Luyendyk Jr.

After thanking Mike Jenkins and everyone at TRAXXAS Rob MacCachren went on to say, “The track was incredible; we were flying to new heights, distances, gap jumps. SST is way more than Mickey Thompson use to be. Flying 25-30 feet in the air, I ask myself; ‘Are we really doing this,’ these trucks Robby has built are doing a great job handling the challenges we put them through. All these fans need to spread the word to the off-road and motorsports community and get everyone to come out and enjoy the show.”

With the win Rob MacCachren (145) had earned a total of $100,000 so far and stretched his two point SST series lead to 10 points over second place Robby Gordon (135). Third in the series is PJ Jones with 107 points accumulated.

The Super Stadium Buggy 12 lap main event consisted of eight entries. The buggies ran on the shorter course designed to avoid the two super jumps. When the checkers had flown it was Apdaly Lopez taking his first SST win. In the beginning Phil Bollman and Cole Belio took the pack around turn one. Later on Rich Welch had bounced off another competitor and ended up straddling the barrier. Bollman lost his lead when he and Eddie Tafoya and Eric Jacobus all got together in the hairpin and once they got sorted out Bollman was back in sixth. This gave Lopez the lead and he drove the rest of the way to the finish line. Eric Jacobus had also cleared the earlier encounter to take second. Michael Ward finished third.

Super Stadium Karts
In a 12 lap final for the Stadium Super Karts had 13 competitors. On the start four karts got hung up at the first jump but were able to get going before a yellow stopped the action. Myles Cheek had taken off from his front row starting spot with Eliott Watson second. The order remained pretty well the same for most of the race until a yellow caused a restart due to a roll over. Once racing again Myles Cheek headed straight to the checkers for the win. Crossing over a close second was Eliott Watson and third was Broc Dickerson.

In the Monster Truck class the elimination final event came down to Dan Runte driving Summit Racing Equipment Bigfoot and Eric Swanson in his Lat Oil No 103. The final showdown was close but Dan Runte took home the top honors.