Valley Off Road Racing Association VORRA held what they titled an Extreme Short Course event on a new race venue June 19. There were a total of 38 entries and a good turn out of fans to the new facility despite it being an unseasonably hot day. The new track is located in Marysville, CA and part of the E-Street MX Park. The Myers Construction Services out of nearby Browns Valley, CA helped in designing and building the 5/8 mile track, with future plans to lengthen the racing surface to over a mile. The track is built in the Feather River bottom which separates Marysville from Linda Ca with the Hwy 70 bridge connecting the two towns. As it turned out parking under the bridge provided much needed shade for what was a rather hot weekend.

VORRA is one of the oldest off-road racing series in the country beginning in 1975. Now under new ownership, BJ and Laura Butcher have put together an X-treme short course UTV/Open series with three race weekends set for 2021 to be run in both Northern and Southern California. There next short course event is set for October 29-30 in Folsom, CA. However, BJ did say they would try and have another race in Marysville later in the year.

I decided to follow the Myers brothers, Cody and Mason, in the racing effort for the weekend. Those two, and also my new friend Beau Judge held my main attention. As it turned out all of their racing effort had plenty of ups and downs. The rest of the field provided fans with some tight racing action.

I believe Mason was first to get a taste of bad luck as he lost a front axle and got his Pro Turbo CAN AM up on its side with its wheels waving at the fans. His problems continued during the first of the two race format. While running with the leaders his car intercooler intake hose came loose, causing him to DNF. In the second race the car went into limp mode for reasons unknown, but some say the E85 fuel has a tendency to break down causing it to lean out in excessive heat (just track theory). 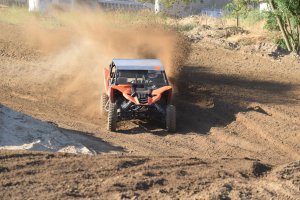 Cody’s first race ended when he also broke an axle on his Production 1000 Yamaha. Trying the switch back corner in second gear he caught a rut and almost cart wheeled over, then when he landed suffered two flats. His second race went much better as he got second which earned him second spot on the podium. 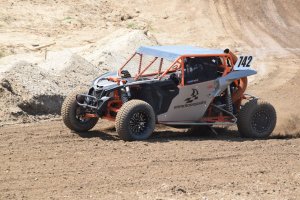 I am beginning to wonder if those I root for are jinxed. Beau Judge didn’t have an enjoyable day either. During practice one could hear the CAN AM had a bit of roughness to it. Beau pulled off once, but was able to come back to finish the session. His first race looked good as he was able to fend off Keith Brooks to take the win. In the second race Keith got out front early and Beau would once again pull off, but was able to return a lap down, finishing fifth. Cory Deen took second with Cody Stutsman third.

Pro Buggy class was dominated by Lorenzo Bonacci although he had some stiff competition from Dale Ebberts. Ebberts had actually rolled in moto one, but once back with the rubber on the ground finished second in both races. Scott Peterson was third.

In the Youth RS1 action Braden Judge took the first moto win but had to follow Cole Gamma across in the second moto which gave Gamma the overall with Judge second. Tyler Shade was third.

There were seven entered in the Sportsman UTV class which saw Scott Melville take moto one win with Rob Parsons second. In the following event the two switch positions giving Parsons the overall.

There were six entered in the Production 1000 class. Cory Vanderveer dominated both moto wins with Justin Radford crossing over second in the first race and Cody Myers second in moto two.

In the JR2-170 Group A action Taryn McCalla took the overall with Jordyn Skaggs second and Gage Romero third.

Group T-4400 belonged to Joseph Azevedo while John Hultsman brought out his 4400.