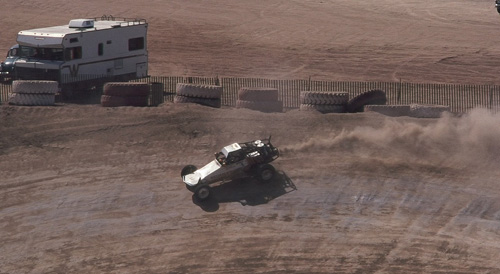 In 1967 the Baja De Saddleback was formed in Orange County, CA as the first off-road park in the US. Saddleback Park got its name due to the fact that it was laid out in the foot hills of Saddleback peak which was visible from anywhere in the park.

During a conversation with Bruce Meyers he was able to give me the early beginnings of Saddleback park. As it turns out the park came about in an unconventional way. Meyers was building his Meyers Manx buggies in Orange County, CA so when prospective dealers would fly in to see the buggy business Meyers would put them in a Manx and he then would jump a curb across the road. This "test track" would later become John Wayne Airport and with construction going he was able to use the ditches and excavated land to his advantage for the demonstration. This went on for awhile but was brought to a halt by the land owner's security. It appears the Irvine Company owned the land and were worried about law suits. When he explained how he needed a place to demonstrate his product the company told him of 740 acres they owned that they were having trouble with people cutting their fences and letting cows out. Although not as easy as crossing the street the land was nearby.

Being friends with Publisher Joe Parkhurst, Meyers said he put a lease together to form an off road park that would accommodate his buggies, bikes and Jeeps. At the time Vic Wilson was his Sales Manager and Meyers asked if he wanted to run the park. Wilson (winner of Chuchua's first National Four Wheel Drive Grand Prix at Riverside and winner of the first National Off-Road Racing Association NORRA event) was a bike enthusiasts and jumped at the idea. Before the park got up and running they realized that the 4-wheelers and bikes together on the small acreage was not a good idea so it became a motorcycle only park. At this time Wilson took control of the park management and Meyers spent more time with his buggy business and would then work with Ed Pearlman in establishing NORRA.

In hopes of gathering the motorcycle crowd Vic Wilson and Bob Maynard (of Thor Racing fame) ran the daily operation of the park. This duo turned out to be a good investment as their motorcycle contacts brought in riders which ended up being Saddleback Park’s market. But later on the buggy crowd did catch on to the new closed course idea when Wilson and Maynard decided to mimic the Baja 1000 and created the Baja De Saddleback series. The motorcycle riders were still the main stay for the track but with the Southern California off-road media taking notice short course racing was introduced to the American racing public. Some of those early Saddleback motorcycle riders converting to race buggies and excelling in off-road were Robby Gordon and the Gillman Brothers, Scot and Mike.

The "Baja De Saddleback" series was a four wheeler, buggy, and motorcycle off road race designed to mimic it's Baja 1000 name sake. At first this event ran over a three-mile course that snaked its way over the 700 acre property. It used the entire lay out of the park to create a rough, fast off-road course. The off-road racecourse was part of the motocross track and included gullies, sand washes, fast fire roads and plenty of rocks covering the surrounding hillsides. With this small simulation of the surrounding desert terrain the off-road racers finally understood what was being offered. One early driver of the Bajacross series, Will Higman was reported as saying, “This venue was an awesome learning experience for me in terms of getting up to speed fast. In short course racing you have to go 110% from the drop of the green flag, and learning car control through tight racing conditions was paramount for me.”

Once a decent car count existed the promoters came up with a new shorter fan-friendly series at Saddleback in 1979 called Bajacross. The new design kept 95% of the action in front of the spectators. Ownership soon after changed to Marv Hendricks with Rich Kimball producing the races. With the afore mentioned media attention Bajacross helped set the future of short course racing. As a side note, Kimball (who still promotes Bug Ins) added that he was also involved in short course races held at Speedway 117 and near Corona, Ca. in the early '80's. Saddleback Park closed in 1984.