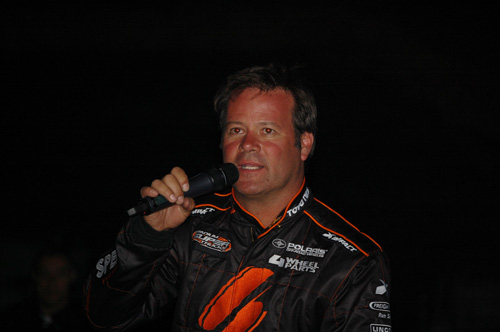 In the 80’s and early 90’s the Mickey Thompson Entertainment Group MTEG packed stadium venues across the country providing fans with plenty of exciting off-road entertainment. After the untimely death of Mickey, and his wife Trudy, the group began to dissolve without the dynamic personality of Mickey Thompson around to guide them. With his loss it appeared stadium racing had become history. That is until the multi talented racer Robby Gordon decided to add promoter to his long list of accomplishments. Gordon went to the birth place of stadium off road racing, the LA Coliseum, to introduce Stadium Super Trucks, SST. With the introduction of SST Racing Gordon said he wanted to revitalize the old series that he was once a champion of and he was determined to make it grow to the next level by adding to the program.

The SST intro, or should I say party, that drew well over a thousand fans to see what was next for off-roading drew many of the previous MTEG stand out racers and some of the new big guns in short course racing as well. Danny Thompson, Glenn Harris, Ricky Johnson, and Cal Wells were a few of the noted former stadium participants and new hot shoes like Jessie Johnson, Luke Johnson, Andrew Caddell, and Sam Hubinette were among the many of who’s who of off-roading in attendance. In fact there were so many notables there we don’t have room to mention all. Judging by the huge turnout it looked like there was a serious interest in stadium racing.

To entice racers to the SST Racing series Gordon dangled a big carrot in the form of a huge purse for the contestants. A $50,000 purse would be split among the top three finishers at each event. If that wasn’t enough to entice the best off-roaders to compete consider the overall SST points Champion was promised to walk away with $500,000 for the series.

At the intro former MTEG racer Glenn Harris showed his enthusiasm for the new sport by adding, “This is my kind of racing. Count me in.” Mike Jenkins of Traxxas told Robby, “I’m in for two of the SST’s.” When it was Rick Johnson’s turn at the microphone he told Robby, as only Rick can say; “I can’t wait to get out there and whip Robby’s ass. I’m in.” The younger drivers also showed their interest but were a bit more subdued in their comments. 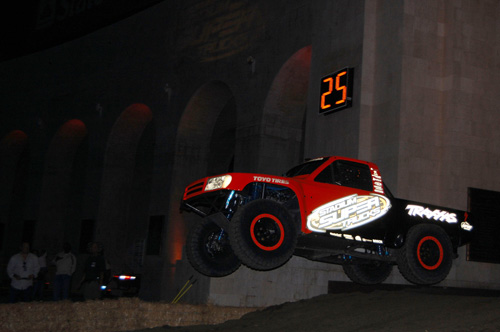 Until Gordon stepped up no dominant personality from the off road community had made the attempt to promote any type of stadium event. If a dominant personality is needed then Robby Gordon should prevail. Gordon however says that having a good team behind him is the key. Besides his crew Gordon partnered with Justin Matney of RPM Offroad fame to help keep SST focused.

When it comes to the new Stadium SUPER Truck series, Amy Coleman, senior director of marketing, Toyo Tire U.S.A. Corp said she thought the series would take off-road racing to the next level, introducing the sport to a new and larger audience both in stadiums across North America and on NBC television. All 12 SST events in 2013 will be televised via tape delay on NBC networks.

When Robby Gordon planned his new series he wanted to avoid how race teams with deep pockets ruled in previous stadium events. With this mind set Gordon leveled the playing field with Spec Trucks built and maintained by SST Racing in Charlotte, NC. The SST crew built templates and laid out a production line to produce the short wheelbase trucks so each are built the same. To ensure quality each of the 600 HP V8 motors are dynoed before each race making this a truly driver’s event. On Friday the driver draws for his chassis for that event. Driver’s crew then install the supplied body kits that are fully decaled with their sponsors to the chassis. Since SST maintains the spec trucks the drivers need a minimum crew. The driver’s crew can make suspension and seating adjustments and are then ready to race. To make this a truly driver’s sport the driver and crew do not have radio communication during the race.

The first of the 12 race series was held at the University of Phoenix Stadium. The unique track design offered a high speed straight, banked turns, flat turns, whoop section, hair-pin turns and totally insane double cross over jumps where drivers jumped over competitors traversing below them. The crowd was pulled to the edge of their seats when other competitors raced underneath the vehicles flying above. The huge jumps were created by positioning tractor trailer containers across the track and covering them with enough dirt to create the spectacular air from the racers. The jumps sent the competitors over 30-feet in the air. Similar to some of the old stadium event tracks this one offered a turn with two options allowing the competitors a different avenue to encourage passing. Gordon’s track had a variety of hard-pack, soft dirt and sand throughout providing plenty of dirt slinging action.

Like other promoters before him Gordon’s original plans proved to be a bit optimistic. In June of 2013 a press release outlined modifications to the SST schedule:

Charlotte, NC (June 18, 2013) Robby Gordon OFF ROAD announced today that is Stadium SUPER Trucks Series SST will make venue and schedule changes that will alter the remainder of its 2013 schedule. Included is the addition of an SST event July 13 and 14 in Toronto.

According to series founder Robby Gordon, “administering the first six races of the season in a span of only nine weeks was a difficult but rewarding challenge for the Stadium SUPER Trucks Series workers and crew. With such an immense undertaking in staging huge events like this around the country, and running six races in nine weeks, the schedule didn’t always allow us to optimize event preparation and race vehicle maintenance.” Then Gordon added, “We learned a lot that will help us continue to bring the most exciting brand of motorsports to racing fans everywhere. The improvements in our schedule for 2013 will enhance our program by helping build our brand and position SST for a great 2014 season and beyond.”

With a new title sponsor for 2014 The SPEED Energy Formula Off-Road Series Presented by Traxxas began its second season at the Firestone Grand Prix of St. Petersburg with its season final set under the bright lights on the Las Vegas Strip during SEMA week in November. At the final round of 2013 PJ Jones took the win with Robby Gordon second and Scotty Steele third. One will note the lack of stadium events as the series has positioned itself mainly as a support event for Indy car races and are featured at X-games. They did retain a closed course format but seemed to be shying away from the expense of stadium construction. Understandable considering Thompson spent an estimated $100,000 in the 1980’s to build a stadium track so the 21st century costs must be astronomical. The SST series still benefits short course’s future as it introduces a whole new segment of main stream race fans to a version of closed course racing.

The racecourses within super speedway’s vary with each venue some offering 130-140 mph strait-a-ways. A variety of terrain is used The steel module ramps provide plenty of wow factor for fans as they watch the 2500 pound race trucks fly.

Speaking of Wow Factor Gordon was approached by The Elevation Group after the series wooed the X Games fans in Austin, TX with an offer to purchase the 18-month-old series. After negotiations were finalized Gordon relinquished 40% of his SST series in Sept. of 2014. The Elevation Group is a Cleveland based award winning sponsorship marketing, event production and communication company. Gordon said that he and Elevation President Denny Young have been friends since his Indycar days, dating back 20 years, so he knows first hand that their team understands how to stage and promote major market, nationally televised sports events. Gordon added, “The group are experts in sponsorship marketing, both in terms of selling and delivering exceptional value to sponsors. And at that time he felt they were exactly what his series needed at this stage of development, and that’s why he took them on as my partners.”

Concerning his involvement Young added, “I have been intrigued with Stadium Super Trucks since my son flipped out over them at a race earlier this year.” When my business partner and I saw an ESPN poll in July that showed 78 percent of X Games viewers rated Stadium Super Trucks their favorite moment, we knew this was a business we wanted to be in. Elevation’s Managing Partner Steve Lindecke added, “Robby’s a dynamic thinker, a driven entrepreneur and somebody that completely understands what’s cool and what works for the millennial generation.”

The partnership seems to be working as Gordon announced in Oct, 2014 that SPEED Energy Formula Off-Road Presented by TRAXXS 2015 season will start in Adelaide, Australia, in conjunction with the Clipsal 500 Adelaide. The Clipsal 500 Adelaide attracted more than 273,600 spectators over four days in 2014.

“The fast growth of the SST series has been incredible and for us to take our series outside North America for the first time is a huge accomplishment, so we were very selective with which event we chose,” Gordon said. “The Clipsal 500 is one of the biggest and best entertainment events in Australia, so for us it was a perfect fit. We know how much Australians enjoy sports, and particularly auto racing, and we know that our TRAXXAS SSTs will put on a great show. It will be nothing like anything race fans in Australia have ever seen before.”