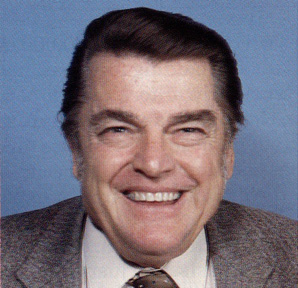 Should one look for a defining event in short course history look no further than Mickey Thompson’s Riverside event. Riverside International Raceway RIR was the biggest Southern California raceway at the time and enjoyed the attention of the international press. It was this press that introduced short course to the mainstream motor sports fan. Thompson acquired use of the racetrack and, realizing he needed help, created Short Course Off-Road Enthusiasts SCORE as a promotional group and sanctioning body. This body would later morph into SCORE-International (Southern California Off-Road Enterprises). The Riverside event was a gamble as it was the most expensive off-road event staged to date with over 200 entries of motorcycles and 4-wheel vehicles competing for the richest purse in off-road history totally $200,000. The challenge to Thompson was to create a Baja atmosphere that was accessible to spectators. Thompson increased his chances of a good turn out by tripling the advertising and public relations budget compared to what other promoters at the time were spending. Thompson was confident as the track offered fans easy access to witness this Baja-type racing from grandstand seats. The off-road racing community by now were familiar with short course so the first event brought out several top racers of the period; Walker Evans signed up as well as Rod Hall, Rick Mears, and Parnelli Jones, to name a few. Thompson started working on the event in April and had everything in order for the first annual Mickey Thompson-Delco RV Spectacular in October 1973.

Delivering such an event in a short time for a normal person would be unheard of but not of Mickey Thompson. No one man, perhaps, had been involved with more different phases of motorsports than Thompson. As a racer Thompson excelled in virtually every form of auto racing. In fact it would be hard for one to name a motorsport that Thomspon hadn’t made some significant contribution to the sport. He held more speed and endurance records than any man in the world, one being the first American to break 400 mph barrier. As an innovator he was credited with the wide oval racing tire, the slingshot dragster design, the first Chrysler-powered dragster, the first nitro-buring dragster, and the first rear-engine type dragster to name a very few of his mechanical accomplishments. Beyond the cockpit he was also a showman and producer. By making creature comforts and complete satisfaction for patrons his highest priorty at all his events he was able to keep the paying customer coming back. So once he fell in love with desert racing it was a given for his new venture to be a success.

For those that did not have a chance to understand the importance of Mickey Thompson to racing let me offer a summary that appeared in one of his race programs. “Somehow, Mickey Thompson managed to cram 26 hours of work into every day and keep tabs on dozens of projects, and businesses, while maintaining first-name relations with top executives of huge corporations as well as continued strong ties with the sport’s grass roots.” 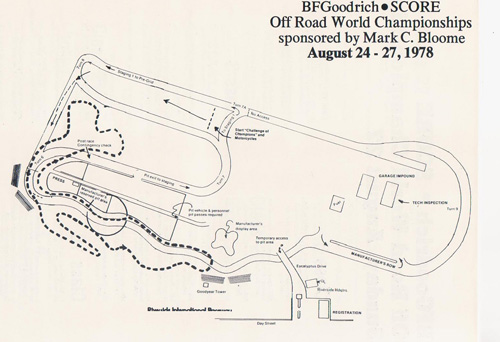 The original 1973 racecourse was designed by Thompson and former world motocross champion Rolf Tibblin. The first event was seven miles in length and included every obstacle imaginable to duplicate the rigors of a typical off-road race. Utilizing portions of the 3.2-mile road course’s infield, and the land surrounding the track, the two designed a demanding racecourse with high-speed straights with sharp turns at the end, mud holes, sand pits, and jumps. Thompson knew the course would challenge the racers but didn’t overlook the fans. In advance of the event he stated, ”People sitting in the turn six grandstands will be able to see about 80% of the action and if they have binoculars they will be able to see in the cockpit with the drivers.” Due to cirmunstances beyond his control the first event opened the weekend of Americas noted gasoline shortage. There were long lines at gas stations causing many fans to not come due to fear they couldn’t get enough gas to get home. Never backing away from his goals Thompson knew his concept was on target and decided to fine tune the event for 1974.

The following year Thompson had Walker Evans design a shorter course that was just over three miles and told Evans to keep the action packed obstacles in front of the spectators. The two day event became The SCORE World Off-Road Championship and was “the race” for off-roaders to win as they took the finish line in front of thousands of appreciative fans and where the driver’s could take home some serious cash.

It was here that the excitement of short course off-road racing was affirmed as a true motorsport to those outside of the off-road world. The event drew thousands of new spectators that were amazed at what the competitors and their machinery were capable of doing. Fans witnessed close quarter racing with a variety of high horsepower race vehicles that provided exciting entertainment for all. Part of the excitement was the fans watching drivers maneuvering over and around man made obstacles. One renowned obstacle designed by Evans was Thompson’s Ridge, an off-camber quarter-mile stretch, that paralled the S-section of the road course, which was right in front of the spectators. Drivers had to maintain top speed of 80-100 mph or the hill’s gravitational pull would suck them down to the pavement below. Usually resulting in some spectacular crashes. The tighter closed course design had fans screaming their enjoyment as they watched the competition battling each other and the obstacles laid out directly in front of them. For many it was the first time they had seen vehicles bang into one another while negotiating rough whoop sections, sand pits and even witnessed racecars get airborne as they flew through the air over large jumps. Besides the obstacles the occasional spectacular crashes kept them glued to the edge of their seats.

At this point in time the same machines that competed in desert races like the Mint 400 or Baja desert events were the same used in short course. No specialty prepared short course vehicles existed so dune buggies, two and four-wheel drive pick-ups, Jeeps and motorcycle classes made up all short course events.

With Thompson’s racing contacts the event attracted the biggest names in off-road racing: Rick Mears, Fritz Kroyer, Bobby Ferro, Malcolm Smith, Rolf Tibblin, JN Roberts, Larry Minor and the media favorite Parnelli Jones. At the time Jones expressed concerns of his Big Oly Bronco not being able to compete with the lighter, more maneuvrable, dune buggies. His concerns were ligitimate as his modified Bronco was the only non buggy in a class of 34 professional entries. Jones didn’t have to worry about that for long as he took his personal van on course after practice was offically over and Thompson disqualified him from the event for illegal practicing. He came back the following year in a Sandmaster buggy and gave the crowd a lot of excitement throughout the race as he battled with eventual winner Roger Mears.

The weekend format saw Saturday’s event with five races, one for motorcycles and four for cars, two professional and two Sportsman classes. Each heat was 45 minutes to an hour. Sunday was the main events with one for Sportsman 4-Wheel vehicles and one for motorcycles. The afternoon main was the three hour Pro final for four-wheelers. The first ever Mickey Thompson-Delco RV Spectacular feature Class 1 winner and Overll 4-Wheel Vehicle winner was Rick and Bill Mears driving in a Sandmaster buggy in the Single-seat 4-Wheel vehicle class. Dr. Bill Kemp drove his Hi Jumper 2-seat 4-Wheel vehicle for the Class 2 win. Taking the 4-Wheel Drive Stock Production title was Rodney Hall and Jim Fricker teamed up in a 68 Ford Bronco to win the Class 3 overall. The 4-Wheel Drive Modified Production Class 4 winners were Jerry Colton with Bob Gellenback driving a 71 Jeep. Dick Lee was the 2-Wheel Drive Production winner (Class 6) driving a 70 VW Sedan. Dr. Don Bare along with Ray Lynch took Class 7 honors in their 72 Ford Courier in the Mini-Pickup class . Class 8 was won by Walker Evans driving a 73 Ford pickup in the 2-Wheel Drive Utility class. In the motorcycle division Al Baker teamed with Bryan Farnsworth to win the Class 21 on a Kawasaki. Riding a 73 Honda, Class 22 was won by the team of Bill Silverthorn and Gene Fetty.

So one can better understand why the “RV” was in the title of Mickey Thompson’s the event offered cash prizes for recreational vehicles entered in special RV events. The low speed handling events offered motorists a chance to display their skills in handling and maneuvering their motorhomes and pull trailers. To add to the party atmosphere there were square dancing contests, rock concerts, fireworks displays, and an air show.

In 1976 the Riverside event had 265 entries in 15 classes with a crowd of over 30,000 watching the competitors battle for $60,000 in guaranteed purse and an additional $130,000 in contingency. The race had become a true weekend event lasting three days. Friday was for practice and Saturday was the qualifying for the main event on Sunday. One race not mentioned often was once the gate was unlocked at Champion Bridge allowing campers into the infield. It consisted of all the weekend campers shuffling for position in an attempt to get their favorite camping spot. Who could blame them as this was known as a weekend long party. As George Harrison once sang, “all good things must pass.” The checkered flag came down on Thompson’s Riverside event in 1988 when the racecourse land became worth more as a shopping mall than a racetrack. In fact, the last professional event held at the famous raceway was titled Stroh’s SCORE Off-Road World Championships. Next to NASCAR, SCORE had the longest running event during Riverside’s 31 year history.

The final main event was won by the then 19-year-old Robby Gordon in the Chevy Heavy Metal Challenge for full-sized trucks. Gordon was a repeat winner that weekend as he also won the Desert Dune Buggy class. Other notable class winners were Ivan “Ironman” Stewart besting Walker Evans in the Mini Metal Challenge. Winning the final Stadium Buggy event was Mitch Mustard. Larry Ragland took home top honors in the Desert Truck class. Winning the Challenger race was Dwaine Walters and Ron Pierce topped the Odyssey class. Roger Mears who was the all-time winningest driver in the Riverside Off-Road Championships series with a total of 20 victories failed to finish in the final event.

After Riverside Raceway had closed SCORE tried to move east to Phoenix International Raceway PIR in 1990. What was billed as the 17th SCORE Off-Road World Championships didn’t go that well as an estimed 5000 fans were all that showed. Driver count wasn’t that great either.

One driver that enjoyed that PIR event was Robby Gordon who once again headed home with two wins for the weekend. Gordon won the feature Class 8 Heavy Metal Challenge event over Walker Evans and did so in a dominating way. At the finish Gordon had almost lapped third place Frank Vessels. For his second win of the day Gordon won the dune buggy class after fending off a hard charging Greg George who in turn had his hands full of third place finisher Jerry Whelchel. Jerry Whelchel came back to take the win in the 1600cc Baja Bug class with Sage Council Racing team owner LaDonna Sukut co-driving. The Midwestern standout Jack Flannery also took home a class win.