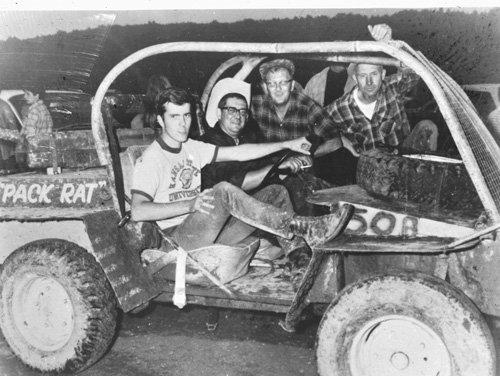 Earlier we mentioned the Brush Run 101 Crandon, WI event. Over time they too had transformed the long course event into a more spectator version of short course off-road racing. The original Brush Run 101 event became the World’s Championship Off-Road Race that takes place on Labor Day weekend and has been at the current 400 acre site known as Plummer's Farm since 1984. The event ran the long course until 1979 when it moved to Pitt's Field and was run on a five mile course. The move in 1984 resulted in a new short course that was 1.75-miles in length then in 2002 Crandon created a short cut to make the track less than 1.25-miles so the track would be in full view of all spectators. The shorter track is used for all races except the Heavy Metal Challenge Shootouts, which are run on the traditional 1.75 mile course that has made Crandon famous. Today the raceway features permanent amenities ranging from spacious campgrounds to luxury skyboxes.

In the early '70s off-road racing was popular in the deserts of Southern California and down the Baja Peninsula so one might ask how did an off-road event get started in the Nicolet National Forest of Crandon, WI. It just so happens that local Jaycees President Rolly Yocum picked up a magazine with an article about the Baja 1000. He was intrigued and never forgot that article. When Yocum and his fellow Jaycees were kicking around ideas of putting on events that might create income for their community he submitted the idea of an off-road race. To Yocum’s amazement it was agreed upon. The idea may have come from Yocum but he said in no way should he be credited with the running of the event. According to Yocum, Gary Cyrus was the back bone in the early days and really took care of everything. Gary said, "I don't want to toot my own horn but I was there through thick and thin, and often there was more thin than thick in the beginning."

When asked how many entries were at the first event Yocum says he believes there were 47 four-wheel vehicles and over a hundred dirt bikes competing in two separate classes. Yocum said the best he could remember the entry fee was either $25 or $35 and it would be a few years before they began charging spectators $1 to get into the fairgrounds. The first event had a total purse of $1500. Winners of the event were off-road enthusiasts Wally Schauer piloting and Jim Zbella co-driving in a modified VW buggy turning in a winning time just over three hours.

As with any new organization there was little sponsor support in the beginning. At the time Cyrus said that most of the off-road community considered the Midwest racers a bunch of country hicks until Jack Flannery went west to Las Vegas and put in a good showing against the best off-road racing had to offer. At the event Dusty Time’s Jean Calvin took notice of Flannery and her mention of his ability brought some recognition to him and the other Midwest drivers. Soon after Walker Evans showed up at Crandon and Cyrus said that really opened the door for other west coast drivers taking notice of what Crandon International had to offer. The event gained enough recognition that in 1997, Sierra Entertainment, released a SODA-themed racing video game called SODA Off-Road Racing. The races at Crandon became the most prominent short-course event, so big in fact a second event was added called the Brush Run. In 1989 ESPN took notice of the event and broadcast the first of many Crandon events that were now being billed as the World Championships.

Jack Flannery became one of the most well-known names in off-road racing for his talents as a competitor and innovator. At his induction of the Off Road Motor sports Hall of Fame it was noted, "Jack Flannery is credited for bringing short course off-road racing to the mainstream by being the first Midwest native to organize a professional off-road race team that was capable of competing against, and beating, the best off-road racers in the world. His passion and commitment to the sport and innovative truck designs helped bring short course off-road racing to a higher level. Being continuously involved in every aspect of the sport, from track designs and layout, to bridging the gap between promoters, racers, fans, and sponsors alike, he enabled more people to experience and enjoy the sport on all levels."

The "Big House" as Crandon had become known has gone through several sanctioning bodies in its extensive history. The Wolfhead Sportsman Club, which ran the local short track events in the area, were the first to offer some organization. Later on the Short Course Off-Road Drivers Association SODA was created by the efforts of Jim Conway. He couldn’t remember exactly when SODA was formed but said some of the others involved that he could remember were Terry Wolf, Tom Swartz and Terry Friday. Next to run the show was the Championship Off-Road Racing CORR. SODA and CORR were active in more than just the Crandon event they also raced in the upper peninsula of Michigan since 1975 at Bark River Raceway located just three miles from the town of Bark River, MI., Mirroring the Crandon community, the local community eagerly supports this track with the Bark River Lions Club in charge.

In what might be considered an attempt at making short course a truly national series SODA drivers ventured west in 1996 for the SODA Chevrolet Off-Road Winter Series held at Glen Helen Raceway Park in San Bernardino, CA. At the event Jimmie Johnson from El Cajon, CA took top honors for the series sponsor in his Chevrolet. The following year it was the same group of racers but this time the sanctioning body and title sponsor had changed. The 1997 winter series was titled the CORR Championship Series/Exxon SuperFlo Winter Series. The racers were greeted with a new one mile course designed by off-road’s standout Ivan “The Iron Man” Stewart.

When asked how SODA ended Conway said that he had submitted a five year plan to SODA in the mid 90’s but it didn’t recieve the favor of the group so he then joined up with TV personality Marty Reid who formed the Championship Off-Road Racing CORR series. Many of the drivers were swayed over to the new series because of the ESPN TV coverage that Reid brought. Reid then expanded the series from its original Wisconsin and Michigan venues and included events in Kansas, Iowa and Minnesota. With his TV production company he was able to secure airtime on ESPN2 and soon after the SPEED Channel. More about CORR later.

The next title to cover the midwest series was the World Series of Off-Road Racing WSORR created by noted off-roaders Jack Flannery and Doug Davis. When the World Series of Off-Road Racing WSORR became the promoters at Crandon they announced a multi-year agreement with Lucas Oil as title sponsor. The series ran in six states throughout 2007. The Traxxas TORC series became the sanctioning body next but then in 2010 ownership of the event passed to United States Auto Club USAC with Traxxas still the title sponsor. In 2011 TRAXXAS hired BlackBox Interactive