Today short course machines are specialty built from the ground up for maximum performance on the tighter courses they perform on. In the beginning the same machines that competed in desert races like the Mint 400 or Baja events were the same used in short course. No specialty prepared short course vehicles existed then so dune buggies, two and four-wheel drive pick-ups, Jeeps and motorcycle classes made up all short course events. Not so in today's mega bucks specialty built tube frames. By reviewing the classes of vehicles and some of the machines used then and now one can see the evolution that short course has taken.

At first the Grand National Sport Trucks were heavy full-size modified pickups. It quickly became obvious the tight confines of stadium racing required better handling vehicles. So with the constantly improving technology of the day the switch was made to the more nimble highly modified mini-pickups. Factory backed mini-pickup trucks with the latest technology soon became the norm. Built from the ground up specifically for stadium racing those sophisticated racing machines represented both the domestic and imported brands and were equipped with a maximum engine displacement of 2850cc (183 cu. in.). Many started racing with highly modifed four-cylinders with no more than six cylinders being allowed. Glenn Harris' Team Mazda raced the factory rotary engine. The Grand National Sport Trucks were vehicles marketed as mini or mid-sized factory production 2-wheel drive's with a minimum wheelbase of 104 inches and a maximum wheelbase of 119.6 inches. Body styles had to have been series produced in quantities of at least 5000 units within a 12 month peroid and be readily available to the general public. Having showroom appearance went further in the rules as tires had to be D.O.T. approved production light truck tires. All the lights had to have O.E.M. appearance. To remain current, body styles were not allowed if more than three years back dated. This show room appearance applied to the old car sales adage of, "Race on Sunday, sale on Monday." At the time these high flying trucks required not only quick reaction and expert driving skills but plenty of physical stamina. A competitive model would cost anywhere from $125,000 to $200,000 to build and required a like amount for the support for a full season.

When considering the vehicle classes for his original stadium event Thompson had to chose from existing categories, selecting the most popular and best-suited to the stadium competition. However, after a few years of operation Thompson added an additional category. One might say the UltraStock class introduced in 1985 by MTEG could be consided some of the first specialty built racers for short course. They were also restricted to 2-wheel drive but could be either front or rear wheel drive. Although most were rear engine buggies with fiberglass bodies fitted. A mass produced "kit car" reduced fabrication coasts by installing a "pod" inside the chassis. This pod included a molded-in stock appearing dashoard, floorboard, and innner side panels. The look of production cars built for racing short course with the sleekness of stock bodied sports cars was an idea that Mickey felt fans could identify with. Also the manufacturers involved at the time may have added to his decision making. This class body style also had to utilize a replica body of currently manufactured Sport Utility vehicles with at least 5000 units produced and be readily available to the public. At first the look-alike cars were the Pontiac Fiero, VW Golf and Corrado models and Porsche. The class was first introduced at the Los Angeles County Fairgrounds and the event was won by Vince Tjelmeland. At the urging of various manufacturers in 1990 the Jeep Cherokee, Nissan Pathfinder, Toyota 4-Runner, Ford Explorer were added to the class line up. Then in 1993 the car models were eliminated and the class designation became the Sport Utility.

The Super 1600 buggy class is one of the original classes still raced in short course today.These popular single-seat, open-wheel buggies weighing in between 1100-1200 pounds are light and very agile making them ideal for the tight confines of this type of racing. The buggy class is popular with racers for their relatively low maintenance cost. Powered by a rear-mounted 1650cc motor the engines are commonly of the Volkswagon or Toyota brand. Air cooled engines could run a displacement of 1835cc. Jerry Whelchel was the all time main event winner in the MTEG series with many of his wins coming in this class.

4-Wheel ATV
In the beginning of the ATV class there were only three-wheel ATVs. Shortly after the newer and improved four-wheel ATV came on the scene, all running 250cc engines. Although twin cylinder displaced engines could run up to 350cc. For a short time both the three and four-wheel ATVs competed together. The ATVs were well represented by the major factory manufacturers such as Honda, Yamaha, Suzuki and Kawasaki. In 1992 a couple of new brands came on the scene when specialty built Laeger and JPs were introduced. These two brands made a serious impact as in 1993 the top six points finishers were on either of these brands. That year Doug Eichner took the class championship on a Laeger with runner up Mark Ehrhardt on a JP.

There is something about the scaled down version of racecars that are fan favorties. The Odyssey Class that later became the Superlite class was one of the earliest scaled down off-road racecars. Having progessed from unsuspended all-terrain Honda Odysseys introduced to the seriesw in 1984 they soon became full-blown sophisticated racing machines. This class evolved as later modifications were introduced from aftermarket shock asborbers and special A-arms. At first stock frames were retained. Their agility and quickness made them ideally suited to the tight confines of stadium racing. As the class popularity grew there were more modifications available and eventually special frames were allowed. Making their transition into full-blown racers came when fully-independent suspension systems, disc brakes, automatic clutchs and supertuned 400cc two-stroke engines were installed. So in 1987 they offically became Superlites. 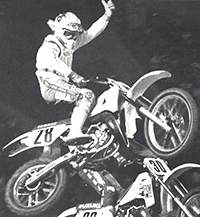 UltraCross was the MTEG version of motocross racing for 2-stroke 250cc motorcycles and was introduced in 1987 at the MTEG Hoosier Dome event. Later on four stroke engines running between 250-612cc were permitted. This was Thompson's only two-wheel class and added a unique twist by running this event in reverse direction from the four-wheel classes. The UltraCross class served as a stepping stone for many young racers headed into the AMA Supercross series such as Jeremy McGrath, Jeff Matiasevch, Larry Brooks, Shaun Kalos, and Michael Graig.